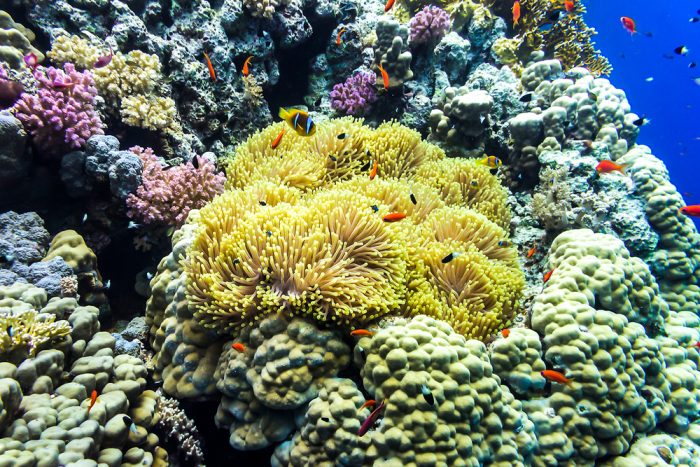 Ocean acidification is the ongoing decrease in the pH of the Earth‘s oceans, caused by the uptake of carbon dioxide (CO2) from the atmosphere.[2] Seawater is slightly basic (meaning pH > 7), and the process in question is a shift towards pH-neutral conditions rather than a transition to acidic conditions (pH < 7).[3] Ocean alkalinity is not changed by the process, or may increase over long time periods due to carbonate dissolution.[4] An estimated 30–40% of the carbon dioxide from human activity released into the atmosphere dissolves into oceans, rivers and lakes.[5][6] To achieve chemical equilibrium, some of it reacts with the water to form carbonic acid. Some of these extra carbonic acid molecules react with a water molecule to give a bicarbonate ion and a hydronium ion, thus increasing ocean acidity (H+ ion concentration). Between 1751 and 1996 surface ocean pH is estimated to have decreased from approximately 8.25 to 8.14,[7] representing an increase of almost 35% in H+ ion concentration in the world’s oceans.[8][9] Earth System Models project that within the last decade ocean acidity exceeded historical analogues[10] and in combination with other ocean biogeochemical changes could undermine the functioning of marine ecosystems and disrupt the provision of many goods and services associated with the ocean.[11]