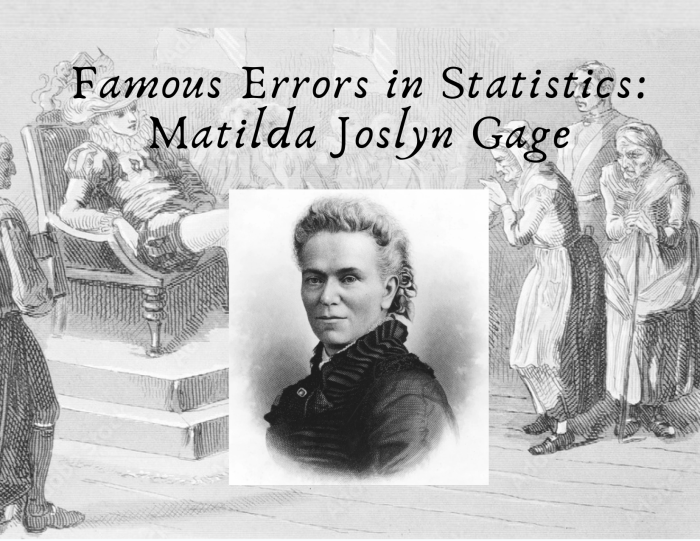 In a previous post, Connor talked about a massive overestimation of the human toll during the European witch hunts. It’s easy to dismiss this, and other gross misuses of quantitative methods, as simply a funny anecdote or a one-off mistake. Unfortunately, things like this don’t just fade away with no impact. Connor will dive into how Voigt’s miscalculation has continued to live on in different forms. All of these examples illustrate a common phenomenon we see today media – how people misrepresent data to support a narrative.

A major change to Voigt’s calculation occurred in the 19th century, during which his original estimate was presented as exclusive to women. Today, people generally know that more women were targeted during Witch Hunts than men were. However, the notion that the witch hunts were a primarily anti-women phenomenon is more recent. American feminist Matilda Joslyn Gage was one of the first individuals to present a feminist interpretation of the witch hunts. However, her interpretation of the witch trials is flawed and has not stood up well. She characterized witch trials as a misogynistic outburst directed by the Catholic Church against women. While the witch hunts had misogynistic roots and the Catholic Church played a major role, her version erases the reality of male witches, who made up as much as 25% of all executed witches (and the majority in some areas, like Scandinavia). The association has stuck, however, and contributed to the spread of misinformation. Other contemporary feminists, including Andrea Dworkin, have repeated the figure as nine million women, and Gage is incorrectly cited as the creator of the nine million number by many.

Voight’s estimations were also misconstrued by the Wicca. According to Wiccan mythology, there was a millennia-old pagan religion that was gradually wiped out with the Christianization of Europe and completed with the “Burning Times,” a period from around 1450 to 1750. The Wicca saw the witch hunts as the final attack by the Catholic Church to eliminate older belief systems. There were adjustments to Voight’s estimation for it to align with Wiccan mythology. Voight’s nine million estimate was calculated over eleven centuries, but many shortened the time frame by a few centuries to coincide with the Burning Times. Most notably, this misconstrual is seen in the BBC documentary “The Burning Times” by author Starhawk.

The nine million myth was promoted by neo-pagans and feminists to paint an alternative picture of history. Other groups used it to manipulate public opinion. As Voight attributed the deaths during the hunts to the “Christian Church,” key groups relied on the claim to advance anti-church agendas. For instance, his number was most popular among Protestant sectarians who wanted to put blame for the trials on the Catholic Church and away from the Protestants. It was also used by the Nazis. They had interests in investigating the witch trials to use in anti-Catholic propaganda to argue that the Catholic Church had sought to eliminate Germanic beliefs. However, other than broadsides against Catholics, the number gained little currency and was never more than one tool in a broader arsenal.

Through this series, we’ve seen the damage that shoddy scholarship can cause. Voigt could not have imagined the diverse lives that his number would live, yet it lived them nonetheless. What started as a claim in a little-known article would become a sticking point for groups ranging from American feminists to the founders of a new faith to the Nazis. At the heart of this claim lies the same statistical mistakes we’re cautioned against in any statistics class: applying a sample estimate to too broad a time range and geographical area, not leaving a record of how you get your calculations, and most of all not double-checking your work. In the end, Voigt shows that one mistake can survive far longer (and spread farther) than its author might expect.