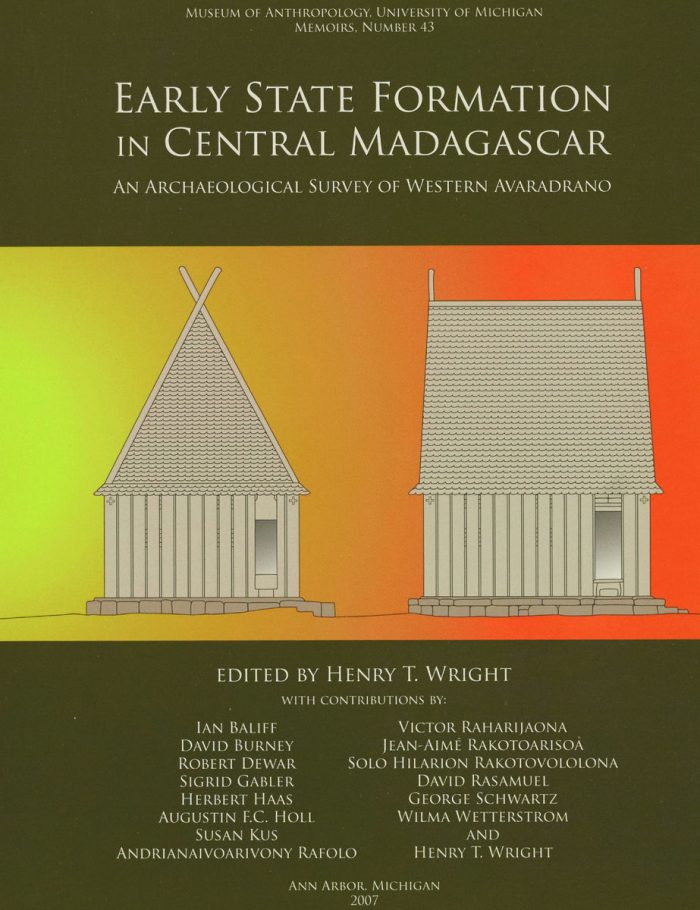 Distant Madagascar, the island at the end of the world, has many lessons to teach. The ancestors of the Malagasy people established themselves at least 1500 years ago. Again and again since their arrival, the Malagasy have created new kinds of political communities. This study concerns the indigenous state of Imerina in the central highlands. Archaeological survey and excavations in the portion of Imerina called western Avaradrano provide detailed information on 258 archaeological sites in an area covering 120 square kilometers north of modern Antananarivo. The first pioneering villages, established by AD 1200, developed into small hierarchical polities by 1400. After several centuries of growth and conflict, the Merina ruler Andrianampoinimerina sanctioned changes in the organization of the kingdom of Ambohimanga, in its ideologies, internal political structure, military, market system, and even agricultural system, which created a new and more complex system around AD 1790. This polity expanded to control most of Madagascar by the early nineteenth century. These changes are manifested in settlements on the ground. This study uses new methods for building archaeological chronologies, using aerial images to assess archaeological sites, and estimating populations. Its perspective on state formation will be of interest to anthropologists and historians, to those with diverse perspectives on the evolution of complex cultural phenomena, and to those who simply wish to understand Madagascar.

“. . . of great value to scholars working in Madagascar, as well as of broad general interest to archaeologists working on a range of theoretical issues.” J. of Field Archaeology,  2009