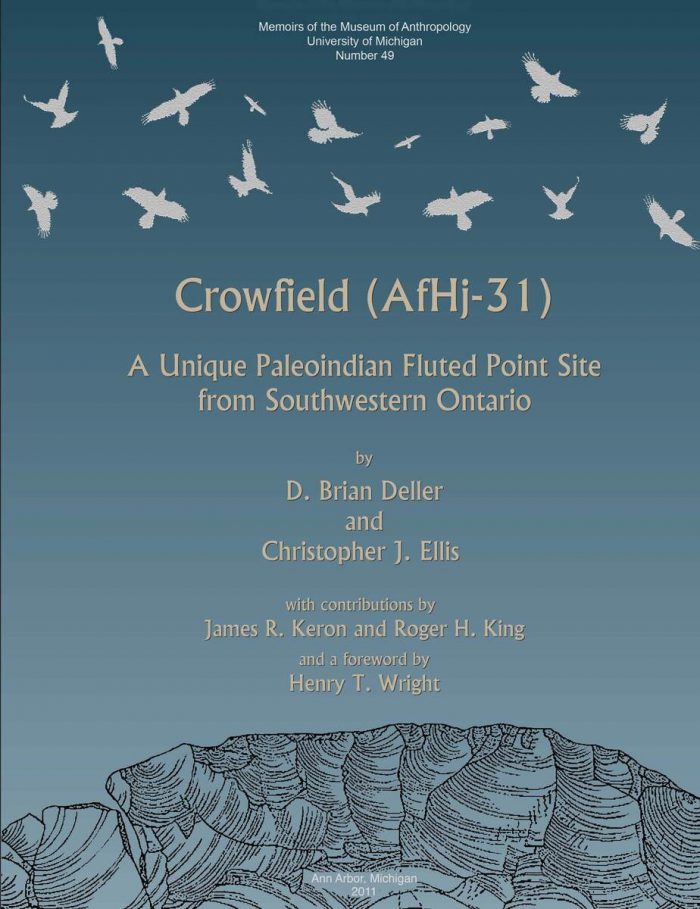 This monograph provides a detailed description and analysis of the Crowfield Early (fluted point associated) Paleoindian site, excavated in 1981 and 1982. The site has two main features. One is a small concentration of unheated Paleoindian tools and debris typical of most campsites. That material clusters around a subsoil concentration of heated lithic debris (called Feature #2), which may be a simple hearth remnant, although other interpretations are possible. The other feature (called Feature #1) was a major discovery and unique in the annals of Paleoindian studies. It consisted of a pit that contained 182+ heat-fractured Paleoindian stone artifacts, including 30 fluted bifaces, as well as a range of other bifacial and unifacial tools, preforms, and blanks. The objects represent a purposeful artifact cache that had been carefully sorted into different tool classes and types and then deliberately destroyed or burned, suggesting the feature activities involved sacred ritual. This feature represents the best evidence for Early Paleoindian sacred ritual activities in all of eastern North America. Also, the feature assemblage closely approximates an individual’s functioning tool kit, as contrasted with the surplus, seasonal and insurance gear, or offerings, that dominate the other known Paleoindian caches. As a functioning stone tool kit, it provides a unique opportunity to develop and begin testing ideas about how Paleoindian knappers organized their technology.

This volume will obviously be of much interest to Paleoindian scholars, especially since it allows one to begin considering aspects of Paleoindian lives that go beyond simple material and economic concerns.

“The Crowfield volume sets a new standard for Paleoindian lithic analysis, whether that analysis focuses on a cache or not, and it sets that standard very high.”Ontario Archaeology, Volume 93

“I strongly recommend purchasing this book, thinking it indispensable in the library of any researcher interested in Early Paleoindians and lithic technology. The richness of the Crowfield monograph is based on the complexity of the investigation, the contribution of multiple lines of evidence to support the interpretations, as well as the candid approach of the authors who want to understand but recognize the difficulty of making stones talk.” Recherches Amérindiennes au Québec