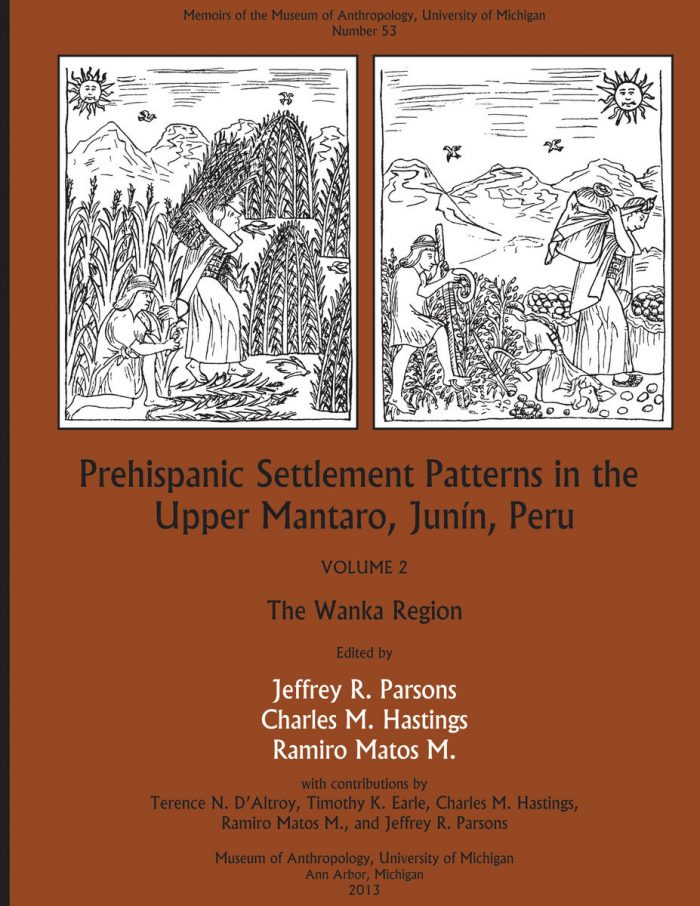 This monograph is based on six months of systematic regional survey in the Wanka Region of Peru’s sierra central, carried out in two fieldseasons in 1975–76 by the Junin Archaeological Research Project (JASP) under the co-direction of Jeffrey R. Parsons (University of Michigan) and Ramiro Matos Mendieta (Universidad Nacional Mayor de San Marcos). It describes some 287 archaeological sites within a survey area of ca. 445 square kilometers lying between ca. 3200 and 4000 meters above sea level in elevation. Four major occupational periods are distinguished: Early Horizon, Early Intermediate Period/Middle Horizon, Late Intermediate Period, and Late Horizon; subsequent investigations in the same region by the Upper Mantaro Research Project (UMARP), directed by Timothy K. Earle (University of California at Los Angeles), refined the LIP chronology into early and late phases, and this new phasing has been applied to most LIP sites in the original JASP survey. The site descriptions include 24 sites in the bordering Jisse-Pomacancha Region, and several site plans from the original survey area, subsequently surveyed and mapped by UMARP archaeologists. The archaeological sites are considered within their environmental, ecological, ethnohistoric, and ethnographic contexts.

“How do we survey? How do we think through a survey? What gets recorded, what gets left out? And what justifications exist for these decisions? . . . young scholars can find many answers here.” J Anthro Res 2014
“. . . impeccable presentation of the colossal surface survey itself, well peppered with thoughtful reflections on the methods deployed and the results obtained.” Antiquity 2014