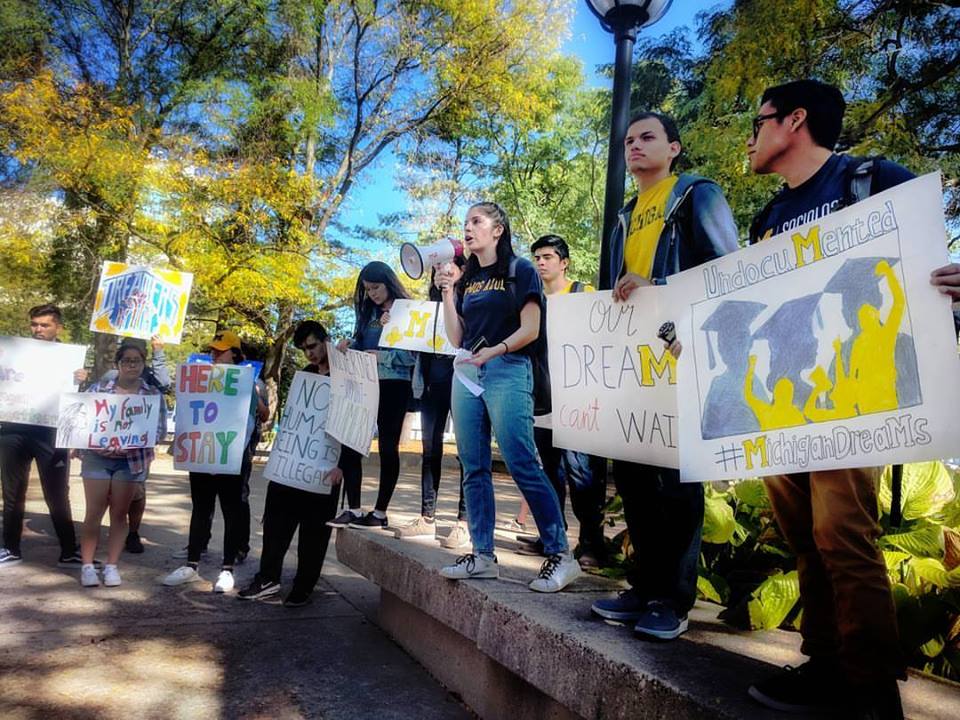 In this episode, we’re listening to the voices of Dr. Ann Lin, Carlos Robles-Shanahan, and Dulce Rios-Ortiz as we explore the resistance and rugged path toward opportunities undocumented students face at the University of Michigan, and their commitment to support and advocate for the needs of the undocumented community.

Photo, from left to right:

Dulce is a senior in the College of Engineering, studying Engineering Physics with a concentration in Optics. She is an advocate for DACA and undocumented students, and works to support students to build connections and opportunities on campus.

Ann is an associate professor at the Ford School of Public Policy. She is currently studying immigration policies, such as worker programs and legalization, and the political beliefs of American immigrants.

Carlos is currently consulting global transfer-pricing, and working with multinational corporations to analyze, develop and document global intercompany pricing strategies. He has a Master’s in Public Policy from the University of Michigan.

In 1982, the U.S. Supreme Court ruled in Plyer vs Doe that undocumented children and young adults have the right to attend public primary and secondary schools. This was a significant shift to the American vision of equal access to education for children regardless of status. Every undocumented youth has a different story but the aspiration to become educated and integrated into our societal structure, to contribute to economic growth and stability, and to be successful is one of many. Consistent grit and motivation move this community out of the trenches to continue to push forward despite the limitations and barriers they may face. In efforts to compensate for their undocumented status, stress under the particular layers of anxiety can produce acute awareness and approaches to excel in multiple domains. Aurora Chang (2001) shares how her undocumented status led her to experience hyperdocumentation, producing an exceeding amount of awards, accolades, and academic degrees as a means to legitimize and produce acceptance in American society.

At the University of Michigan (U-M), social movements do not exist in vacuums, but beginning in 2011, Kevin Mersol-Barg and Luz Viviana Meza, founders of the Coalition for Tuition Equality (CTE), among other student leaders, and coalition partners, began to organize, and through their unique efforts, they galvanized support and created necessary change. Struggles for access to education for the undocumented community, while often untold, have a rich legacy of informal advocacy and pressure by numerous members of U-M that dates back decades. As the state of Michigan does not have a governing board of higher education, each institution is allowed freedom in establishing residence policies for its students. For undocumented students, many of whom have lived in Michigan for most of their lives, overcoming the numerous hurdles to being accepted into the U-M only resulted in classification as an out-of-state student. In-state tuition and costs of attendance are a significant burden upon many families, but out-of-state tuition not only is substantially higher but also denies the reality that these are in-state students.

Recognizing these inconsistencies and echoing movements across the country, CTE helped to lead campus efforts and called upon various forms of activism to educate, empower, and pressure the U-M to pass in-state tuition, a beginning to the pathway of educational access. Silent protests, crafting resolutions through Central Student Government, blocking traffic in front of the Michigan Union, disrupting and participating in Regents’ meeting were only some of the visible representations of their efforts.

Today, as we consider the new federal administration’s anti-immigrant policies that target undocumented populations, we again question the future of our undocumented community. When will their challenges and difficulties become visible in a way that does not demean their experiences, but rather empowers social change? Undocumented students at the U-M have battled their invisibility on campus with constant struggles of feeling unsafe and unheard. With “Help Enforce the Law and Make America Great Again” posters appearing on campus, asking folks to call Immigration and Customs Enforcement (ICE) if they thought someone looked “illegal,” and ongoing fears of hate crimes targeted towards undocumented students on campus, there becomes an intensified pressure for undocumented students to remain in the shadows.

America is, as many say, the land of opportunity, but what happens when you live your life never knowing what the future will hold? Today, our undocumented youth live their lives dreaming of a future that they may never see. Uncertainty flows through their veins and becomes detrimental to their health and success. Watching their “legal” peers flash forward to meet their aspirations, planning their next move up the ladder of opportunity, while all our undocumented youth can do is hope for a better tomorrow. Not everyone has the freedom to look forward to the future because the present itself is uncertain and unsafe.

Dream is what they say. Dream of a better tomorrow, one where the threat of deportation is not present, one where there is no division among the good and bad immigrant, and one where mom and dad will be there the next morning. They are human, like you and I. They are our neighbors, our children’s teachers, and our friends, but their opportunities to advance and develop into active members of our society become limited when we place barriers to their success.

Chang, A. (2011). Undocumented to hyperdocumented: A journada of protection, papers, and PhD status. Harvard Educational Review, 81(3).