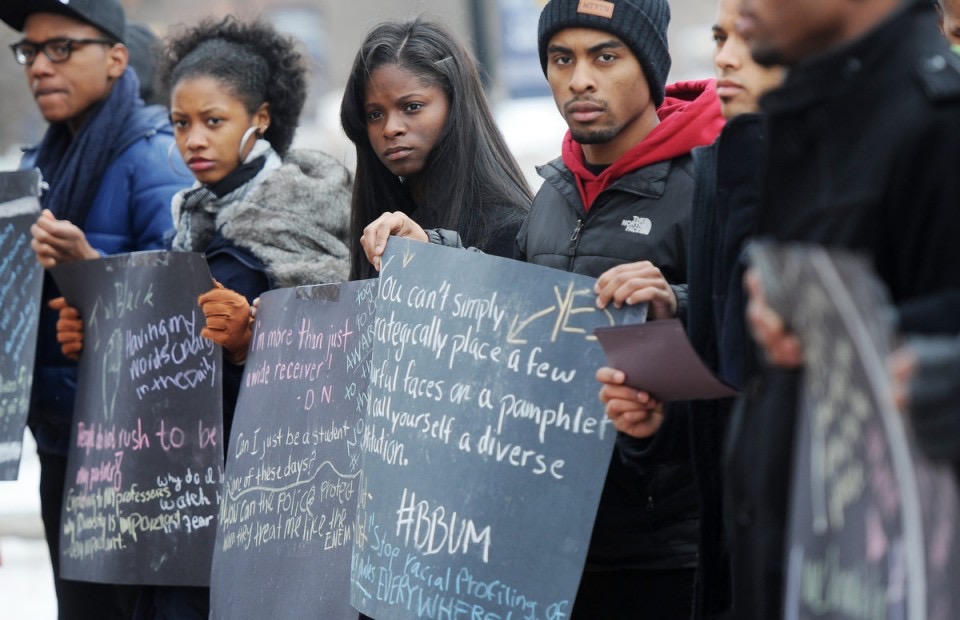 LISTEN TO THE DAYS OF FUTURE PAST PODCAST
Download

In this episode, we’re listening to the voices of Elizabeth James, Sherise Steele, and Kyle Trocard as they explore the connection between technology and the development of social change movements at the University of Michigan.

Sherise is a financial advisor at Gateway Financial Partners. As a first generation college grad from the University of Michigan she served as president of the Black Student Union and other organizations on as a student.

Kyle is a sophomore in the Ross School of Business, planning on double majoring in Business Administration and Psychology, and is currently involved in the Black Student Union. I contend that the cry of “Black Power” is, at bottom, a reaction to the reluctance of white power to make the kind of changes necessary to make justice a reality for the Negro. I think that we’ve got to see that a riot is the language of the unheard.

Dr. King characterized riots as the language of the unheard and the 1960’s were a series of protests to secure the citizenship of unheard and marginalized Black Americans. To characterize the 1960’s in the United States as anything less than tumultuous would be an incredible understatement. The decade saw nationwide protest and widescale protests decrying the Vietnam War, protests for the Civil Rights Movement, and counter-protests trying to diminish the wave of social change. Protests on college and university campuses have been and continue to be uniquely suited to participate in national protests movements. Altbach & Cohen (1990) remind us that colleges and universities have long been hotbeds of student activism. College students stood at the forefront of the American socio-political consciousness, particularly when it came to issues of gender equity, reproductive and civil rights, war, and the United States’ political position in the world (Altbach & Cohen, 1990; Joseph, 2003). The 1930s and 1960s are known for being periods of contentious student demonstrations that affected local, state, and federal policy. This brief essay seeks to contextualize student protest in this period and through the contemporary moment, offer a history of student protests (specifically the protests associated with the Black Action Movement and Being Black at the University of Michigan), and offers brief glimpses into the moments these protests and movements inspired. This was true with BAM on the heels of the Civil Rights movement, but it was also true with #BBUM. #BBUM as a protest movement was intrinsically tied to the Black Lives Matter (#BLM) movement that happened after the death of Trayvon Martin at the hands of George Zimmerman (Love, 2013). #BLM was at its inception a movement born in the social media age and #BLM used (and it continues to use) of social media for organizing, communicating, and recruitment (Love 2013). #BBUM used similar tactics to build a community and political organizing structure that was able to unifying a disparate community and move towards collective action on the University of Michigan campus. #BBUM used Twitter and social media as a means of organizing on campus, but it also helped the cause to be known nationally.

The ways that University of Michigan students used national protest to spur their own on campus goals has been historically remarkable. That said, the interplay between the local activism and protests and the national activism and protests reminds us that college students do not exist in a bubble. The University of Michigan student body has aligned themselves with causes that have a bearing on all of us. The issues of representation that have made up the core of these student protests have been stable in the last five decades and does not seem to be changing. If anything, this call to action has reminded us that there has been a steady reluctance to change in order to make justice a reality and that students across time have felt unheard by the administration at the University of Michigan.

Chapter 2: A Focused Framing of BAM and #BBUM

Our focus is anchored in two moments (i.e., BAM and #BBUM) and the ways that technology influenced those moments. In this section we take some time to detail BAM and #BBUM along with some of the ways technology was used in these moments. The University of Michigan was familiar with protests.  Students have been supporting equal rights, voting rights, civil rights, religious freedom, tuition equality and diversity over the years. One example of this is the 1960’s there were War Protests in the Diag in the middle of campus (Beth James, personal communication). The Black Action Movement (BAM I) was organized by the Black Student Union Association, Association of Black Social Work Students and groups of Black students from the Psychology Department.  They organized the most successful strike in the history of the University of Michigan for eight days (Harvard Crimson, 1970).  Over 300 professors and teaching assistants cancelled classes. As a part of these demonstrations, the organizers submitted 11 demands to the administration. These demands were as follows: 1) Ten per cent black enrollment by fall, 1963, 2) Nine hundred new black students by fall, 1971 (450 freshmen, 150 transfers, 300 graduate students), 3) An adequate supportive services program including financial aid to finance black students’ education, 4) Graduate and (nine) undergraduate recruiters to recruit blacks, 5) A referendum on the March Student Government Council ballot to have students vote on assessing themselves $3.00 for one year for the Martin Luther King Scholarship Fund, 6) Tuition waived for minority group students who are residents of the State of Michigan and admitted under special programs, 7) The establishment of a community-located Black Student Center, 8) All work of a permanent nature on the Black Studies Program is to be halted until a community-university forum and effective input is established, 9) The creation of a university-wide appeal board to rule on the adequacy of granting financial aid grants to students, 10) A revamping of the Parents’ Confidential Statement, 11) One recruiter for Chicano students to assure 50 students by fall, 1970.

The technology of the first BAM protests mostly included newspapers. Apart from the aforementioned Harvard Crimson, the story of the first BAM movement was also covered in regional newspapers (e.g., the Chicago Tribune and the Indianapolis Star). As we move into the BAM II and BAM III technology changes. Technological changes include word processors (Apple II) 1977 and the first IBM personal computer in 1980.  The laptop computer was born in 1986 and in 1994 the World Wide Web (internet) was running with limited websites.  During the inception of BAM II (1975) there was the same technology available to help organize support for protests that was used in 1970’s.  The radio, TV news, newspapers and fliers.  When BAM III (1987) was active, personal computers were available to use word processors to print out fliers to put on campus (Beth James, personal communication). One of the bigger biggest changes for organizing social justice events was when social media.  In the previous historical overview section, we delved a bit into how #BLM came into being and how University of Michigan students used the hashtag as a form of activist organizing. Here, we write more specifically about #BBUM.

Along with the community building aspect of #BBUM, the organizers also presented their own set of seven demands: 1) We demand that the university give us an equal opportunity to implement change, the change that complete restoration of the BSU purchasing power through an increased budget would obtain. 2) We demand available housing on central campus for those of lower socio-economic status at a rate that students can afford, to be a part of university life, and not just on the periphery. 3) We demand an opportunity to congregate and share our experiences in a new Trotter [Multicultural Center] located on central campus. 4) We demand an opportunity to be educated and to educate about America’s historical treatment and marginalization of colored groups through race and ethnicity requirements throughout all schools and colleges within the university. 5) We demand the equal opportunity to succeed with emergency scholarships for black students in need of financial support, without the mental anxiety of not being able to focus on and afford the university’s academic life. 6) We demand increased exposure of all documents within the Bentley (Historical) Library. There should be transparency about the university and its past dealings with race relations. 7) We demand an increase in black representation on this campus equal to 10 percent.

One of the more surprising things about these demands is four of the seven demands have been met, with the fifth (Trotter) on its way. The Black Student Union was granted $60,000, Intergroup Relations Courses are in place, emergency funding for students with financial aid has been established and documents are digitized in the Bentley Museum (Brandon, 2015).

The history of student protest at the University of Michigan is rich and evolving. As social media and other technologies come to the fore, the nature of protest will almost undoubtedly change. As these evolving streams come together, the way that administrators respond will also have to change. What the future holds is uncertain, but it will certainly hold echoes of a past that has not yet left us.

Brandon, A. (2015, January, 20) University reflects on #BBUM a year after demands. Retrieved April 1, 2017, from https://www.michigandaily.com/news/bbum-final