Built in 1837, this Greek revival house is noteworthy not only for its architecture but also for its intriguing history. For over 160 years, the home built by Nathan Burnham, was located near the Huron River, although its address did change from 947 Wall Street to 940 Maiden Lane in 1969. Then in 1995, the University of Michigan wanted to build additional parking on Wall Street for the medical center across the street and purchased the Burnham lot. Sadly, at that point, most of the historic homes on the street had already been razed and the Burnham house had only been listed one year before (Covitt 2001: 30). The University had a history purchasing historic homes and then demolishing them regardless if they were historically listed and culturally significant (Covett ibid.) and for that reason it was likely to be torn down. However, after petitioning by several Ann Arbor preservationists it was removed from its foundation, transported to the Arboretum, and saved from demolition! Currently, it is an educational center for urban environmentalism.

Here’s the curious bit. Oddly, it now sits on land that is leased from the Forest Hills Cemetery. So, it is also privately owned, even though the building itself and much of the surrounding land is the University of Michigan’s. Additionally, the house’s age (the building was never previously affiliated with the University) actually makes it older than the President’s House, and thus the oldest University building. Little Carpenter House. Although not located in Ann Arbor, it is an illustrative example of a Greek Revival residence.

This unique two-story Greek Revival house that is faced with clapboard has a recessed porch with a central entryway and square columns. It is surprising to see that even people with modest means in the 19th century designed their homes using Greek models. Homes like these speak to the range of Greek Revival architecture and reinforce that during the mid 19th century it was the national style and that many people were inspired by the Greeks at the time. Built in 1905 by John Koch, the stucco shelter features slim Ionic columns in its semi-circular portico, a dentiled cornice, classical pilasters, and decorative trim all fitting within in the classical revival style (Wineberg 2014: 35). Located on the Huron river Island Park has a “Greek Revival shelter, play area, picnic tables and grills, benches, paths through the Island, and a connection to Fuller Park” (a2gov.org). The picturesque riverside shelter is often rented out for events and is a popular location for photos, particularly high school senior portraits. 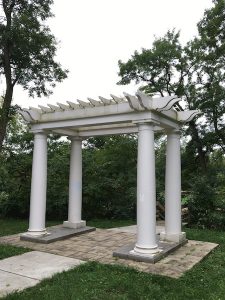 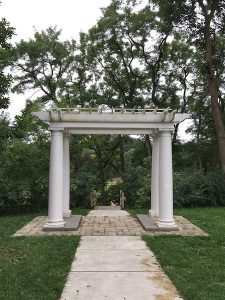 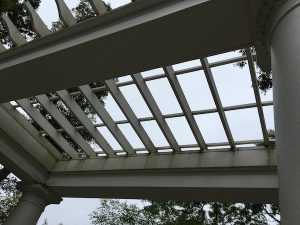 View of trellises from below.

West park was created in 1908 by the City Parks Commission but it wasn’t until 1927 that the gateway was built (Wineberg 2014: 61). The gateway consists of four Doric columns and two trellises where wisteria is draped to give shade visitors. The park has bandshell for outdoor concerts, basketball and tennis courts, volleyball posts, a baseball diamond, spray fountain, playground, picnic tables as well as a walking trail. Similar to the William Anderson House at 2301 Packard, the Kempf house is a pure temple style Greek Revival home with square columns that has decorative window grilles in the frieze section in the entablature. Thought to have been designed by Arden Ballard of Ypsilanti, the Kempf house was built in 1853 for Henry DeWitt Bennett (Wineberg 2014: 83). Reuben and Pauline Kempf bought the home in 1890 and both pursued musical careers in Ann Arbor (Shackman 1990). Reuben was a musician and teacher and Pauline gave voice lessons from the home and were both very active musically within the commnity (Wineberg ibid). After Pauline’s death in 1953 their neighbors (the Parkers) bought their home and in 1969 sold to the city and now it is a museum (Wineberg ibid.). The Kempf-House museum preserves and displays the house as it was in 1890s and overall highlights its musical and cultural importance in Ann Arbor’s history. 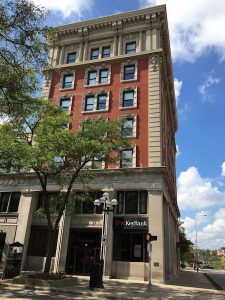 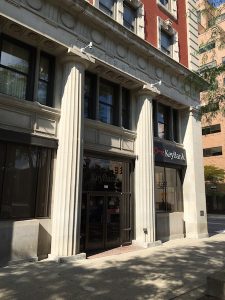 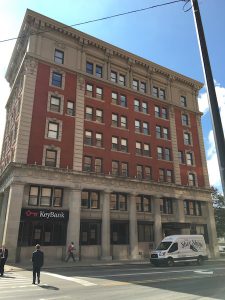 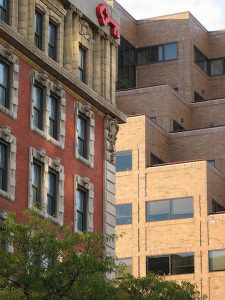 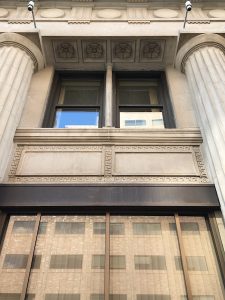 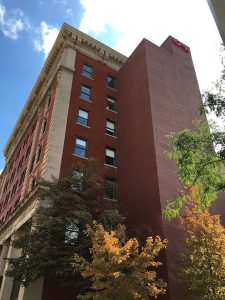 The Glazier building was designed in 1906 by architect Claire Allen for Frank Glazier, who was a wealthy banker and the State Treasurer in that year. However he was put in jail for for corruption because he misappropriately used used funds to build this building (Wineberg 2014: 121). After the First National Banked moved away in 1929, it held the offices of the Ann Arbor Trust Company from 1930-1975 (Wineberg ibid.). Although designed in the Beaux Arts style (from France) the building still displays some Greek features such as Doric columns and Ionic pilasters, triglyphs and metopes filled with simple medallions in the entablature, and Greek meanders that outline areas between the windows. Since 1975 it has been home to several banks and in 2008 it underwent a $2 million restoration project that restored its historical features (Zemke 2007). 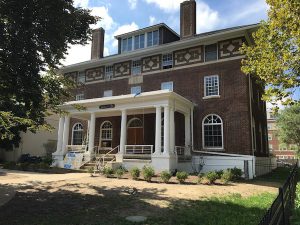 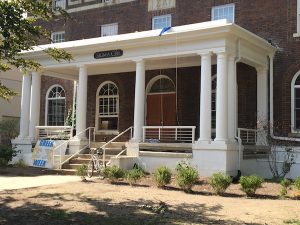 Founded in 1877 at the University of Michigan this Sigma Chi’s building features decorative brick work, various types of window paneling and a Doric columned porch with a simple entablature. 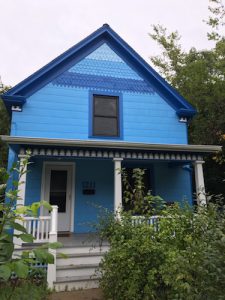 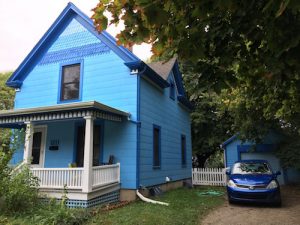 The Wilson Wahr House, originally owned by Judge Robert Wilson was completed in three stages. The middle section was built in 1835, the temple portico in 1843 and the kitchen and rear quarters for the servants in 1850. Considered one of the finest examples of Greek Revival architecture in Michigan and in the nation the Wahr House exhibits extremely well crafted and designed architectural proportions, which have root in Greek archaeology (Tyler 2014). The home owners Norman and Ilene Tyler trace this architectural influence in the their book, Greek Revival in America, from Ann Arbor through the Eastern U.S. to Britain and finally to Greece. Currently they still reside in the bold temple-stlye home and are very prideful of their home’s unique heritage, which in large they have discovered. 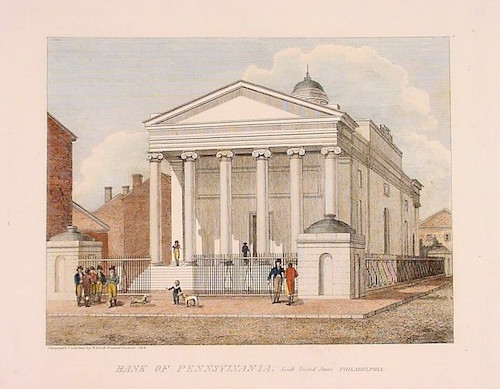 Front of the Bank of Pennsylvania, Philadelphia. Source: phillyhistory.org. 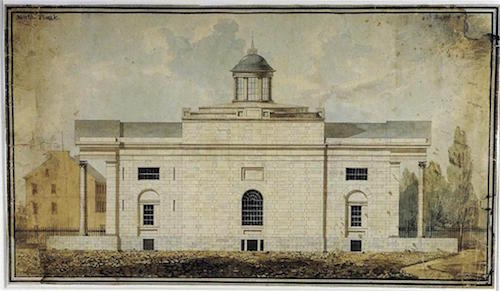 Side view of bank. Source: classconnection.s3.amazonaws.com. 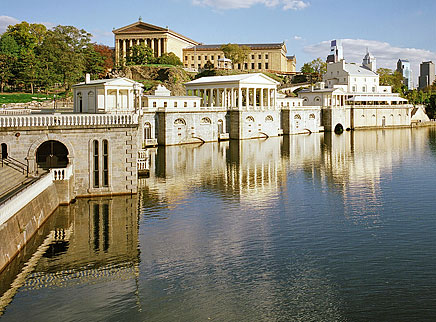 Built in 1812, the Fairmount Water Works, was an impressive display of Greek architecture in Philadelphia.. Source: domusinc.net.

Designed by the English architect Benjamin Latrobe, the Bank of Philadelphia, built in 1799, was one of the nation’s most influential buildings (Finkel 2013 B). The neoclassical building’s elegant design featured Ionic columned porticos on both ends that was awe inspiring and had never been seen before in America (Tyler 2014: 50). It was also one of the first buildings to use archaeologically correct details (from Stewart and Revett’s renowned 1762 book Antiquities of Athens) but was by no means a copy of a Greek temple and was built using a plan of new simplicity and openness (Finkel 2013 B). Thanks to Latrobe’s work, Greek architecture continued to inspire the development of cities in the U.S., especially in the East and even before he planned the Fairmount Water Works complex he had “earned the reputation as the Father of American Architecture” (Tyler 2014: 49-50). His bank was demolished in 1867 but the Fairmount Water Works complex still stands today. The Second Bank of the United States, Philadelphia. Source: theredlist.com.

Like Robert Mills (a prominent architect), William Strickland was greatly influenced by Latrobe and established himself as one of the first architects to use the Greek Revival style when he designed the Second Bank of the United States (1819-1824) (Tyler 2014: 51). Strickland was Latrobe’s student for a short while, but was fired because of his “whirligig temperament” (Finkle 2013 A). Strickland’s design drew influence from the Parthenon’s pediments and its Doric columns (nps.gov) and helped to further exhibit Philadelphia’s affinity to ancient Greece’s glory (Finkel 2011). Currently it houses the Portrait Gallery which exhibits a permanent collection of over 150 portraits of 18th and 19th century political leaders, military officers, explorers and scientists (nps.gov). Girard college’s Founders hall is so immense that it is even larger than the Parthenon. Built in true temple from by Thomas Walters, another of Latrobe’s students, the hall was the college’s first classroom building that was completely encircled by a colonnade (Tyler 2014: 52). Although intended for classroom use according to Girard’s will, which had set aside $2 million for its construction, the “echoing domes and poor traffic flow” made it unconducive to teaching (hiddencityphila.org). Nonetheless, it is considered one of the finest examples of Greek Revival architecture in the U.S. and is a National Historic Landmark, which houses two museum collections and the archives of Stephen Girard houses (girardcollege.edu).