I Wrote This Novel as a Way to Return: An Interview with Ingrid Rojas Contreras

At the center of Ingrid Rojas Contreras’s startling, gorgeous, debut novel Fruit of the Drunken Tree are two voices. One is Chula, only seven years old, a young girl living in a gated community in Bogotá, Colombia, who experiences the conflict of the Escobar years in sounds and colors, in news broadcasts and snippets of conversations ordinarily reserved for adults. And there’s Petrona, a teenager who works as a servant for Chula’s family, under pressure to provide even as her younger brother comes dangerously close to joining one of the many warring paramilitary groups. Through these two voices, a story moves, one of immigration and refugee status, of womanhood and fortune telling, of trauma and how it moves through a body, how it simmers, how it escapes. The novel that emerges is astonishing – a nuanced embodiment of 80’s and 90’s Colombia, an ode to the author’s own experience, and a careful examination of class, gender, safety, and danger.

Ingrid Rojas Contreras agreed to speak with MQR over email.

I was so interested in the way that memory functioned in Fruit of the Drunken Tree. The entire book is an act of remembrance, as Chula, the narrator, looks back on her childhood. Petrona is inflicted with a terrible amnesia, and, at the end of the novel Chula struggles so profoundly with the fact that her father is not the man she remembered. Memory seemed to be a central theme of the novel, both the act of remembering and the pain of forgetting. In your author’s note, you talk about how this novel was inspired by personal, real events that transpired when you yourself were a child. How were you thinking of memory when you wrote this novel? Can you speak to the process of transforming memory into fiction?

I have spent many years thinking about the function of memory. What you try to remember and what you try to forget when you cross a border (on land or otherwise) is central to the immigrant condition. Memory has been a central preocupation for me as a writer—when I had a bike accident and lost my memory for about four or six weeks, what memory means to us took up my mind more than usual. I was certainly interested in how we use memory to define who we are before, but after the accident I became interested in the things that continue to haunt us no matter how much we try to leave them behind. I have always seen Chula as someone who cannot help but remember and Petrona as someone for whom it is imperative she forget. Also, at the most generative time of working on this novel, I was in between visas and could not travel to Colombia. I wrote this novel as a way to return. I made up the country I remembered on the page, which was a natural segway into fiction.

I love that this novel begins while Chula and Cassandra’s father is away. When we first begin Fruit of the Drunken Tree, we enter into the private lives of women, but we also come with the understanding that this private sphere will likely not last. Were you certain about this choice when you first embarked on this novel? What led you to this particular structure?

One of the questions I was entertaining was: how do women and young girls who experience their own power and potential exist in a world that is not interested in giving women that role? This wasn’t always obvious to me, but I wrote into this question. In all my early drafts the men were missing. I don’t have a lot in mind when I begin to write—it’s more of a soup of associations as I search through the manuscript into moments that will allow me to strike upon an emotional or political truth.

All novels contain their own political spheres, but your novel in particular was very deliberate about engaging the politics of Colombia – even though Galán and Escobar maintain a sense of distance, they feel like characters each with their own separate arcs, emotions, desires. The Western gaze has particularly turned to Escobar in recent years (Narcos, etc.), always in opposition to American law enforcement, never in relation with the people who lived within the country he controlled. How did you approach writing these often-mythologized figures, making them part of the daily lives of Chula and Cassandra? Did you feel that you had to work against a hyper-popularized Hollywood vision of Colombian history and politics?

I wasn’t as worried about what I would have to work against if I wrote about Pablo Escobar, but I was deeply fascinated by him. We mythologized Pablo Escobar in our daily lives as Colombians, but he was not the center of our lives or preocupations. I think this is an outsider point of view. Pablo Escobar was larger than life, yes, but so were the paramilitaries and guerrillas. And at the same time, all of them were so mundane and normal that we easily relegated to background, like the weather. They each had the power to change the course of our lives at any moment, and yet we focused on the small desires and hurts of our days.

In your essay for Buzzfeed, you write, “I write first drafts as if I were turning over tarot cards, too: I scribble single, disjointed paragraphs until the right image of a character emerges.” I was so interested by this description – the novel as a compilation of smaller, card-sized pieces of writing. Could you expand on your process of drafting Fruit of the Drunken Tree?

This description holds true for all my writing! Fruit of the Drunken Tree was written one small moment at a time. I like to begin writing descriptions of a character over and over, until I strike upon something that feels full and true. I did this for all the characters in Fruit, but not sequentially. Once I had the right image of the character I would write beneath, writing into the mystery of what they would do next. I don’t like to have a plan, which is maybe why I’m a slower writer. For me there’s more joy in uncovering one card a time.

What were you reading while you were writing this novel? Are there books you see as kin to your own?

While writing my novel, I read a lot for research. Throwing Stones at the Moon is an oral history of displaced people in Colombia, and I read this with Petrona (whose family was displaced by paramilitary) in mind.  I read many Pablo Escobar books, but my favorite resource was The Memory of Pablo Escobar, which is a visual history of his belongings and historical materials. One of the books I hoped my novel could be in conversation with was Arundhati Roy’s God of Small Things. It was a novel I read through once, and having reached the final page, I turned back immediately to the first page. It’s beautifully written, atmospheric, darkly funny, and political. House on Mango Street is a book that has very deeply marked me as a writer and I also hope my novel can be in its family. 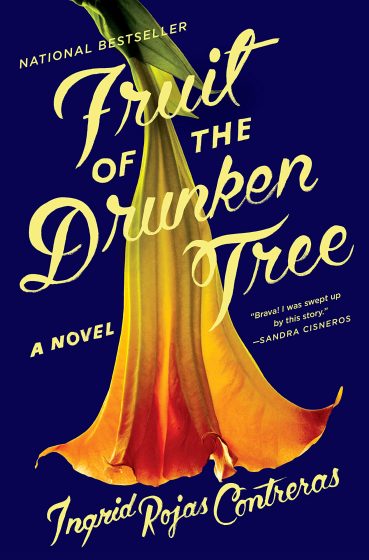 About the author Annesha Sengupta

Annesha Sengupta is a first-year MFA Fiction candidate at the Helen Zell Writers’ Program. Her work is published and forthcoming in Catapult, Tin House The Open Bar, and The Kenyon Review Online. She was a cast member of YKR 2018, a South Asian community storytelling project. You can find her on Twitter @anneshamitha.