Winner, 2019 Jordan Schnitzer Book Award, in the Jewish Literature and Linguistics Category, given by the Association for Jewish Studies 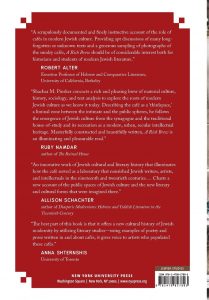 A fascinating glimpse into the world of the coffeehouse and its role in shaping modern Jewish culture
Unlike the synagogue, the house of study, the community center, or the Jewish deli, the café is rarely considered a Jewish space. Yet, coffeehouses profoundly influenced the creation of modern Jewish culture from the mid-nineteenth to mid-twentieth centuries. With roots stemming from the Ottoman Empire, the coffeehouse and its drinks gained increasing popularity in Europe. The “otherness,” and the mix of the national and transnational characteristics of the coffeehouse perhaps explains why many of these cafés were owned by Jews, why Jews became their most devoted habitués, and how cafés acquired associations with Jewishness.  Examining the convergence of cafés, their urban milieu, and Jewish creativity, Shachar M. Pinsker argues that cafés anchored a silk road of modern Jewish culture. He uncovers a network of interconnected cafés that were central to the modern Jewish experience in a time of migration and urbanization, from Odessa, Warsaw, Vienna, and Berlin to New York City and Tel Aviv. A Rich Brew explores the Jewish culture created in these social spaces, drawing on a vivid collection of newspaper articles, memoirs, archival documents, photographs, caricatures, and artwork, as well as stories, novels, and poems in many languages set in cafés.   Pinsker shows how Jewish modernity was born in the café, nourished, and sent out into the world by way of print, politics, literature, art, and theater. What was experienced and created in the space of the coffeehouse touched thousands who read, saw, and imbibed a modern culture that redefined what it meant to be a Jew in the world.

Literary Passports: The Making of Modernist Hebrew Fiction in Europe (Stanford University Press, 2011) is the winner of the 2011 Jordan Schnitzer Book Award for best book in Jewish Literature and Linguistics. The selection committee of the 2011 Schnitzer Award wrote:

“Literary Passports” is readable, scholarly, and original. He covers vast territory, combining close readings with wide-ranging commentary, breaking new ground in modernist studies generally and in the study of Hebrew literature in Europe. In addition to Jewish literary studies, Pinsker integrates a range of critical perspectives and scholarly sources, engaging scholarly work in critical geography, gender studies, and studies of religious experience. Pinsker’s marvelous analyses of the European café as a space of Hebrew modernism, of the “New (Jewish) Woman, and of the interrelation between the “secular” and the “religious” convincingly prove the hybrid nature of modernist Hebrew fiction and of modern Jewish literary production, circulation, and consumption. Most impressive is the clarity of Pinsker’s narrative voice and the care he takes in crafting a compelling and well-structured narrative of ideas.” Women’s Hebrew Poetry on American Shores presents a bilingual edition of Kleiman and Farmelant’s work in a large range of themes, moods, and styles, translated into English for the first time by Yosefa Raz and Adriana X. Jacobs. It includes Kleiman’s poems that were collected and published in a 1947 U.S. volume and a selection from two of Farmelant’s poetry books, published in Jerusalem in 1960 and 1961. The translators have furnished the poems with copious notes, illuminating linguistic and cultural sources of the poetry and making it more accessible to contemporary readers. Pinsker introduces the volume with a background on the poets’ lives and work and a look at the state of Hebrew literature in the first half of the twentieth century. The volume also includes an unpublished essay by Anne Kleiman, addressing Hebrew poet Anda Pinkerfeld and her poetic work, which sheds an important light on the dialogue between women’s Hebrew poetry written in American and in Palestine during the same period. Dvora Baron (1886-1956) was the first woman writer to have her Hebrew fiction canonized during the period of the Hebrew linguistic and cultural revival at the turn of the 20th century. Baron’s representation of traditional Jewish culture, particularly women’s culture, in experimental writing modes, has shed new light on the relationship between tradition and modernity in Eastern European Jewish society and in mandatory Palestine at the beginning of the twentieth century. Hebrew, Gender and Modernity  aims to represent, for the first time in any language, the scope and diversity of the recent scholarly interest in Dvora Baron and her fiction. The anthology presents the work of leading scholars in the field of Jewish and Hebrew studies from Israel and the United States. This collaborative effort creates a dialogue leading to a new and innovative approach to the field of Modern Hebrew literature and culture