Rage In America Is Not New: On Adam Smyer’s “Knucklehead” – Michigan Quarterly Review
Skip to content

It’s sometimes easy to forget that #resistance is not a recent phenomenon. Adam Smyer’s novel Knucklehead (Akashic Books, 2018) looks back at the turbulence of the late 1980s and early 1990s, when tempers flared, divided on the treatment of Black citizens — particularly with respect to police targeting minorities. The novel takes the reader on a tour of a not-too-distant American past, when fear was weaponized and righteous rage boiled over. Smyer’s debut explores themes of the self in chaos; the prose is clean as bone and the anger is focused and piercing.

For Marcus Hayes, a young, Black law student climbing the ranks of a society with little regard for him, a juris doctor is his first step into a larger world, the first of the many weapons — physical and metaphorical — that he’ll wield upon an America seemingly built for others. From the onset, Marcus’s anger is present; he confronts social injustices he sees in everyday life, be it on a bus as a white frat boy harasses a Black man, or otherwise. And while real, visceral danger lurks just below the surface of every interaction, Marcus is ambivalent, standing up for others not merely for their sake, but his own grim satisfaction, as well. He derives a sense of pleasure by making others uncomfortable, and it’s apparent early on that he is no ordinary social justice warrior. 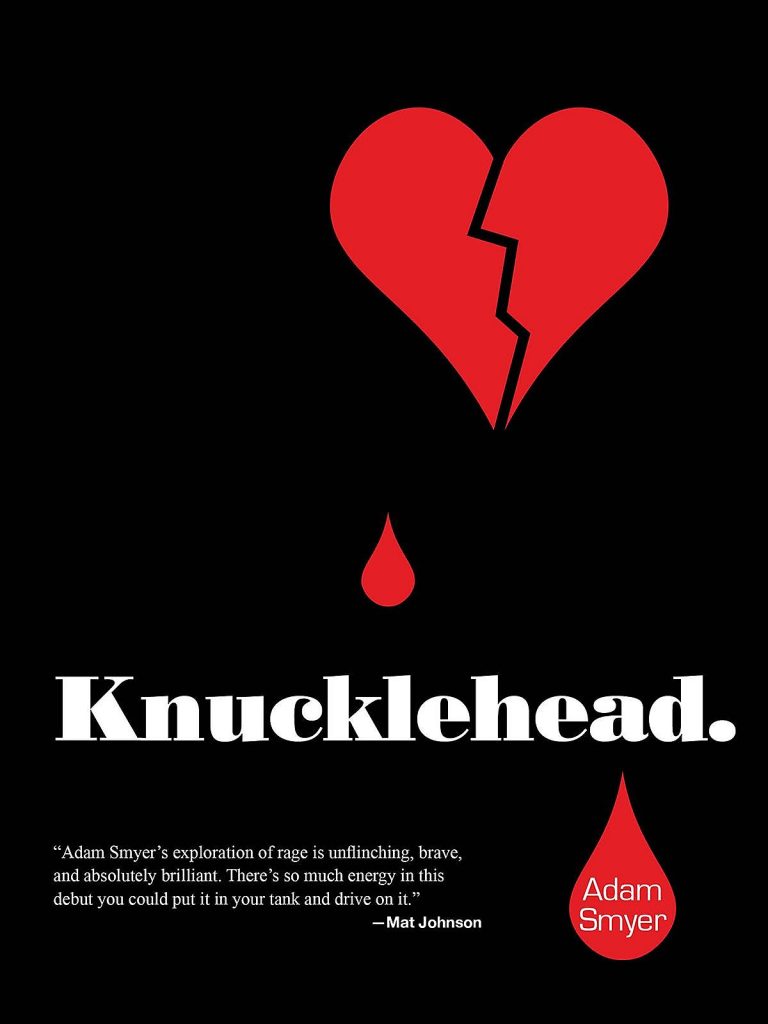 Smyer narrates Knucklehead through Marcus’s journal entries, which date from the late 80s to the early 90s, and the format lends itself nicely to the narrative flow. Some periods are chocked full of entries — notes on events befalling both Marcus and the country at large — while in other sections, large swaths of time disappear to periods of Marcus’s own catatonic state. The dated writings remind the reader of many significant, horrifying events that happened throughout the era, incidents that are sometimes forgotten as new, modern disturbances take precedence in the collective conscious.

Marcus’s rage subsides when he meets his future wife, Amalia, though their happiness is short-lived, and after a tragedy his anger returns with a vengeance. The reader watches with dark anticipation as it seems all too obvious that Marcus’s newfound love of guns and penchant for violence appear to seal his fate, and while the story lingers at times on the mundane, the shockingly realistic confrontations with his real and imagined demons construct the outline of a vivid and intelligent, if not otherwise somewhat-psychotic, individual.

Layered in with Smyer’s apt social commentary is a fine layer of wit. Marcus’s comic sarcasm isn’t unfamiliar, but it rings especially true coming from a character so deeply affected by a sense of rage and anarchy. At one point when his wife is in the hospital, he muses at a pamphlet handed to him by a well-meaning physician: “When doctors have bad news for you, first they give you a pamphlet. There seems to be one for every occasion. The bad-news-pamphlet industry must be a billion-dollar business. Hallmark for hospitals.”

Interestingly, Marcus’s determination to push back at the world isn’t always tied to a greater social cause; often, he’s searching for something deeper and more solitary. Recalling his first fight with a bully as a child, Marcus remembers one of his first revelations towards a larger truth within the world:

That moment when my fist first made contact, I remember being really surprised. Maybe even more surprised than he was. Because I didn’t feel it…It didn’t hurt me. At all…I thought about that later. I thought about it a lot. ‘Cause I was like, If people can hurt other people, and they don’t feel it, and it’s always been that way the whole time I’ve been here, and everyone else already knows this, then what the fuck kind of place is this that I am in?

Though his wife attempts to dissuade him of this notion, once he is back on his own, Marcus embraces this way of thinking, determined to never become a victim of someone else’s desire to inflict pain. And herein lies, perhaps, the crux of Smyer’s novel: that it is a cautionary tale for our present era of divisiveness. If we subscribe to the theory that to inflict harm on others results in no reciprocal harm, it can be too easy to collectively slide down that slippery slope. If we empathize, on the other hand, the results make conflict much more bearable. And is empathy not a salve for anger?

By the novel’s end, Smyer seems to offer his opinion on the matter in an understandably indirect way. Marcus may not be able to cross the threshold into some greater understanding of the world at large, but what he can make peace with, he does, in his own caustic, violent way.

Michael A. Ferro’s debut novel, TITLE 13, was published by Harvard Square Editions in February 2018. He was named as a finalist by Glimmer Train for their New Writers Award, won the Jim Cash Creative Writing Award for Fiction, and been nominated for the Pushcart Prize. Michael’s writing has been published or is forthcoming in numerous literary journals and print anthologies, including Juked, Monkeybicycle, Crack the Spine, Heavy Feather Review, Entropy, Duende, BULL: Men’s Fiction, Vulture, Splitsider, and elsewhere. Additional information can be found at michaelaferro.com.