“Eating the Pig,” by Donald Hall 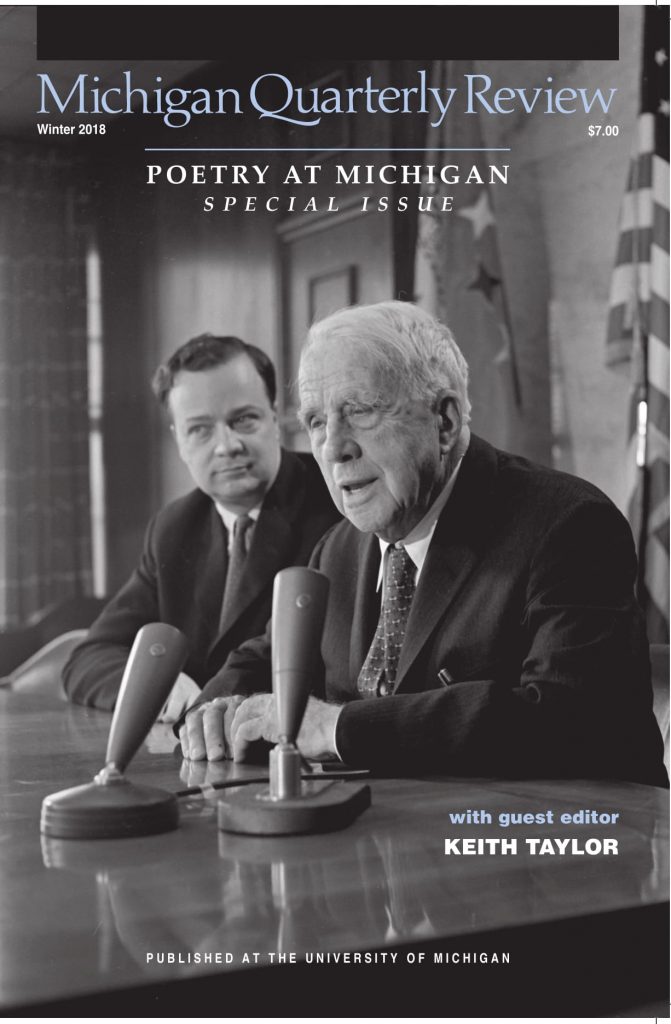 “Eating the Pig,” by Donald Hall, appeared in the Winter 2018 issue of MQR, a special issue dedicated to Poetry at Michigan. The accompanying photo essay by Sarah Innes, “Forgotten Photographs from the Feast That Occasioned Donald Hall’s ‘Eating the Pig,'” featured pictures taken by her late husband, Stephen Blos, at the dinner on which the poem was based. Writes Innes:

I climbed the steps to their corner apartment on a dark Sunday evening. Everybody had made an effort to dress up. The table was set with an Indian print bedspread, mismatched goblets, and tall candles. The pig was shiny and striped like a tiger, with an apple clenched in his teeth, and surrounded by fruit stuffing…

These photographs (and more) are now on view at Hatcher Graduate Library until October 7, 2018 as part of its “Eating The Pig: A Dinner Party in Poetry, Photography and Painting” exhibit. Curated by Sarah Innes, the exhibit previously appeared at the Ann Arbor District Library.

Twelve people, most of us strangers, stand in a room
in Ann Arbor, drinking Cribari from jars.
Then two young men, who cooked him,
carry him to the table
on a large square of plywood: his body
striped, like a tiger cat’s, from the basting,
his legs long, much longer than a cat’s,
and the striped hide as shiny as vinyl.

Now I see his head, as he takes his place
at the center of the table,
his wide pig’s head; and he looks like the javelina
that ran in front of the car, in the desert outside Tucson,
and I am drawn to him, my brother the pig,
with his large ears cocked forward,
with his tight snout, with his small ferocious teeth
in a jaw propped open
by an apple. How bizarre, this raw apple clenched
in a cooked face! Then I see his eyes,
his eyes cramped shut, his no-eyes, his eyes like X’s
in a comic strip, when the character gets knocked out.

This afternoon they read directions
from a book: The eyeballs must be removed
or they will burst during roasting. So they hacked them out.
“I nearly fainted,” says someone.
“I never fainted before, in my whole life.”
Then they gutted the pig and stuffed him,
and roasted him five hours, basting the long body.

Now we examine him, exclaiming, and we marvel at him—
but no one picks up a knife.

Then a young woman cuts off his head.
It comes off so easily, like a detachable part.
With sudden enthusiasm we dismantle the pig,
we wrench his trotters off, we twist them
at shoulder and hip, and they come off so easily.
Then we cut open his belly and pull the skin back.

For myself, I scoop a portion of left thigh,
moist, tender, falling apart, fat, sweet.
We forage like an army starving in winter
that crosses a pass in the hills and discovers
a valley of full barns—
cattle fat and lowing in their stalls,
bins of potatoes in root cellars under white farmhouses.
barrels of cider, onions, hens squawking over eggs—
and the people nowhere, with bread still warm in the oven.

No, we are here, eating the pig together.

In ten minutes, the destruction is total.

His tiny ribs, delicate as birds’ feet, lie crisscrossed.
Or they are like crosshatching in a drawing,
lines doubling and redoubling on each other.

Bits of fat and muscle
mix with stuffing alien to the body,
walnuts and plums. His skin, like a parchment bag
soaked in oil, is pulled back and flattened,
with ridges and humps remaining, like a contour map,
like the map of a defeated country.

The army consumes every blade of grass in the valley,
every tree, every stream, every village,
every crossroad, every shack, every book, every graveyard.

His intact head
swivels around, to view the landscape of body
as if in dismay.

“For sixteen weeks I lived. For sixteen weeks
I took into myself nothing but the milk of my mother
who rolled on her side for me,
for my brothers and sisters. Only five hours roasting,
and this body so quickly dwindles away to nothing.”

By itself, isolated on this plywood,
among this puzzle of foregone possibilities,
his intact head seems to want affection.
Without knowing that I will do it,
I reach out and scratch his jaw,
and I stroke him behind his ears,
as if he might suddenly purr from his cooked head.

“When I stroke your pig’s ears,
and scratch the striped leather of your jowls,
the furrow between the sockets of your eyes,
I take into myself, and digest,
wheat that grew between
the Tigris and the Euphrates rivers.

“And I take into myself the flint carving tool,
and the savannah, and hairs in the tail
of Eohippus, and fingers of bamboo,
and Hannibal’s elephant, and Hannibal,
and everything that lived before us, everything born,
exalted, and dead, and historians who carved in the Old Kingdom
when the wall had not heard about China.”

I speak these words
into the ear of the Stone Age pig, the Abraham
pig, the ocean pig, the Achilles pig,
and into the ears
of the fire pig that will eat our bodies up.

“Fire, brother and father,
twelve of us, in our different skins, older and younger,
opened your skin together
and tore your body apart, and took it
into our bodies.”

About the author Donald Hall