“In these avenues, deafness is our only barricade,” reads the final line of “Checkpoints,” a poem in Ilya Kaminsky’s forthcoming book Deaf Republic (Graywolf, 2019). In a lyric world uniquely his own, deafness and its sister sound, silence, become the central tropes of Kaminsky’s book-length sequence of poems about war, resistance, death, and love. His first full-length collection since his debut Dancing in Odessa (Tupelo Press, 2004), Deaf Republic demonstrates that Kaminsky’s immense talent for sociopolitical critique has only grown more incisive and devastating in the intervening years. Kaminsky’s equally deft handling of fundamental human truths such as love, loss, family, and sex, complement his critique, making Deaf Republic is a must-read for our turbulent times.

Deaf Republic follows the events of a small town named Vasenka. Here, the townspeople have chosen to act as though they are deaf as a form of resistance. Kaminsky’s new book begs the questions: in a time of perpetual war, how do we say anything at all? Even worse, why do we stay silent about the commonplace atrocities happening everyday?

A long sequence of poems, also titled “Deaf Republic,” forms the majority of the collection. Although the poems in the sequence are lyric, Kaminsky provocatively embeds these lyric poems in the structure of a drama. The long poem has two “acts” (sections) which are “spoken” by two different characters in the setting of the fictional town of Vasenka. Vasenka is under occupation by soldiers who “arrive in Vasenka to ‘protect our freedom,’ speaking a language no one understands.” Sitting in the United States of America of 2019, this seems a familiar enough excuse for occupation as any other. Whether in the ongoing occupations in the Pacific or in the Middle East, Americans are used to invading other countries under the pretext of giving the supreme gift of freedom. A bitter humor undergirds Kaminsky’s  phrases; the poet himself grew up in the former Soviet Union before becoming an American citizen. Echoes of other great ironists of atrocities, like Wisława Szymborska, abound in Kaminsky’s latest work. Take, for example, the opening of the last poem in Deaf Republic, “In a Time of Peace:”

Inhabitant of earth for fortysomething years I once found myself in a peaceful country. I watch neighbors open their phones to watch a cop demanding a man’s driver’s license. When the man reaches for his wallet, the cop shoots. Into the car window. Shoots. It is a peaceful country.

The caustic sarcasm serves to point to a deeper contradiction at the heart of America’s image of itself as a nation. These lines might be compared to the Szymborska poem, “The Century’s Decline,” which opens, “Our twentieth century was going to improve on the others,” a jab at the idea of progress, in a similar undercutting tone.

“Dramatis Personae,” the opening poem to the “Deaf Republic” sequence, introduces us to the characters that populate Vasenka. There are two speakers in this sequence: Alfonso Barabinski, a puppeteer and newlywed, the “I” of Act One, and Momma Galya Armolinskaya, the speaker of Act Two. Armolinskaya is the owner of a puppet theater and the instigator of the insurgency of deafness. She seduces soldiers, and then strangles them, covertly disappears their bodies, and invites another soldier in, for another murderous affair. Kaminsky’s characters are carved with nuanced dark humor.

While breaking up a puppet show in Vasenka, occupying soldiers shoot and kill a young deaf boy named Petya. “Our country woke up the next morning and refused to hear soldiers,” Kaminsky writes. In response, the townspeople of Vasenka choose deafness. When soldiers try to talk to them, they point to their ears, signaling that the directives of the occupiers are falling on deaf ears. Acting deaf becomes a pathway to resistance in this strange yet all-too-familiar town.

In the quiet spaces (silences) of their day Armolinskaya teaches a form of sign language from the rafters of the theater. “The townspeople invented their own sign language. Some of the signs derived from various traditions (Russian, Ukrainian, Belarusian, American Sign Language, etc.). Other signs might have been made up by citizens, as they tried to create a language not known to authorities.” Throughout the book, Kaminsky has sprinkled visual diagrams of the sign language such as: 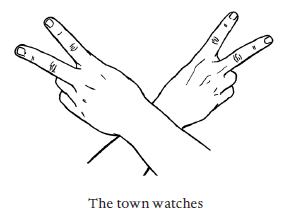 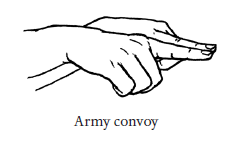 In this way, Kaminsky teaches readers how to understand the language of the town along with the characters. Near the end of the book, an entire poem is written in these signs, without the English translations below. The secret sign language of the people of Vasenka has been translated for the reader, who now understands and is complicit with, the townspeople’s growing insurgency. Even in print, sign language is the same as any other language: translatable and poetic. Kaminsky writes,“ON SILENCE: The deaf don’t believe in silence. Silence is the invention of the hearing.”

The structure of silence figures heavily into the book. Characters often speak directly about or to the silence that they’ve created around them. The word and idea come up frequently in the text itself. One woman “turns and trips in silence / which is a soul’s noise.” Another woman, “speaks against silence, knowing / silence moves us to speak.” In Kaminsky’s otherwise sparse lexicon, the words silent or silence appear sixteen times throughout the book. Many poems are also short, usually less than twenty lines, with short line lengths as well. Several poems only consist of two, three or four lines total. These poems in particular take the form of aphorisms, rhetorical questions, or near riddles. One structure that appears a few times, each with a new variation is Question. One example of this variety of poem is:

A quiet between two bombardments.”

These two lines sit all alone on the page under the title. When reading the book, you get a sense of all the white page space that surrounds each poem. Each whiteness is like a silence, a void where words could have been. The engulfing white space of the book acts as a mimesis to the silence of the townspeople, a silence with which they choose to overthrow the world they were forced to live in.

Kaminsky’s Deaf Republic is both rigorous and profound. Kaminsky reveals himself as a showman of narrative, informed by a deep sense of character and tension, as well as a skillful lyricist, present with each syllable, each letter, each rhythm the breath makes as it darts its ways around his sparse and elegant poems. The blend of genre between drama and lyric creates a world that is both prescient in its allegory of our geopolitical moment and yet profoundly personal in its modes of exploring loss, sexual love, and family. Deaf Republic asks what is unique and important about each human life, each human utterance, and why does it all matter? Is poetry an alternative to silence? “What is silence? Something of the sky in us.” 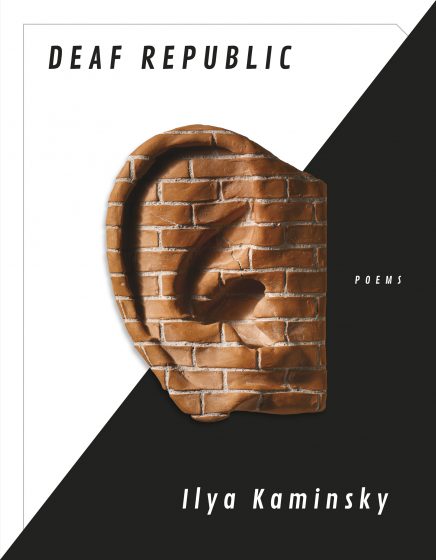 Ilya Kaminsky’s Deaf Republic is available for preorder now, or for purchase on March 5, 2019,  at your local bookstore, or here. Read more about Ilya Kaminsky here.