Preservation and Perseverance: A Review of Emily Jungmin Yoon’s A Cruelty Special to Our Species

A Cruelty Special to Our Species by Emily Jungmin Yoon is a tender and sharp collection that navigates the history of “comfort women” used by the Japanese Empire during World War II. By bringing these events to the forefront of our minds and conversations, these powerful poems insist on the importance of the past. Yoon recognizes in her author’s note that, “even if a part of history may not seem to be relevant to [the readers’] lives, it is—it is their reality too.” In the reality of Yoon’s collection, past and present vibrate simultaneously.

Mine is the jam-packed train. The too-weak cocktail… This question by a Canadian girl, a friend:

Why don’t you guys just get along? The guys: Japan and Korea. Meaning: move on. How do I

answer that? Move on, move on, girls on the train. Destination: comfort stations.

The opening poem, “An Ordinary Misfortune,” leaps between subjects and time. The speaker uses the phrase “move on” as a vehicle to collapse the present and the past. The past becomes the reason why the speaker cannot “move on.” Through repetition Yoon unfolds the narrative’s quiet horrors and shifts the grounds of the reader’s understanding. These shifts capture the disorientation of ancestral and personal trauma in daily life.

Yoon disperses poems of the same title (“An Ordinary Misfortune”) throughout to explore the personal and collective; the capacity and insufficiencies of language; and the unfolding of time through language. By calling these instances of violence “ordinary misfortunes,” Yoon uses irony to place these cruelties—personal and collective sexualized, fetishized, and racialized violences—next to everyday mishaps. Uncannily, the word ordinary comes from the Latin ordinarius, meaning orderly. These ordinary misfortunes become orderly misfortunes, those curated by armies and nations for the sake of power.

It is also no coincidence that Yoon names these poems a misfortune. In “An Ordinary Misfortune,” a speaker recalls: “There was a man. A Japanese soldier. One that did not believe in old superstitions. One that did not believe in sex before battle as a charm against harm.” The Japanese ritual of luck (as an excuse to commit sexual violence) emphasizes the fortune in misfortune, giving the titles of these poems an even darker, ironic twist—that these atrocities were enacted in the name of superstition and justified by deeming these women unlucky and less fortunate.

Throughout A Cruelty, Yoon looks to etymology to navigate the inadequacies and capacities of language to a precision that cuts through and against meaning. For example, in “An Ordinary Misfortune,” Yoon uses the etymology of the word “capable”—from “Late Latin capabilis ‘receptive’” to “Lettish kampiu ‘seize.’” As this word morphs, its layers stripped to its bare bones, the narrative reveals that “comfort women” were only capable to do what they were told because they were given pills (from “Greek kaptein ‘to swallow, gulp down’”) and enslaved (from “Welsh caeth ‘captive, slave.’”). Yoon urgently and beautifully crosses back and forth through time, tracing words as if understanding their roots will also help her understand why violence did and continues to occur.

In the section “The Testimonies,” Yoon draws from documentary materials to compose persona poems in the voice of these women, and combines their voices with her own. By inhabiting this space, Yoon works through the grief she feels from these cruelties, and at the same time, amplifies the women’s voices and stories. By using English, Yoon opens this history up to a wider range of readers. Language seems to be of concern to Yoon, who does not use English to comfort her readers, but to urge us to listen closely to these devastating voices.

my body a ruined village  a

our manager gave me a packet of black powder

to reduce my bleeding from my vagina

He then told me it was made

of a Chinese soldier’s corpse

I dream of human legs rolling around

As with many poems in this section, the testimony of “Kim Soon-duk” inhabits a space of timeless history, in which physical violence and psychological trauma are ghosts of the present, even appearing as dreams. Yet, the speaker must continue on—she later states, “I had my new life to live.”

In this section, speakers are disrupted by the past yet determined to move on; they seem to occupy an in-between space of dream and reality in which the dreams are of the past and reality is an attempt to forget. With repetition, Yoon amplifies the permeation of the past. In “Kim Sang-hi,” the narrative is punctuated with the phrase “I didn’t die.” Though usually this phrase might imply resilience, in this poem, it suggests the endlessness to the violence experienced by the speaker. At the end, the speaker repeats “but I cannot” until the last line: “When I wake up every morning I cannot.” Her inability to forget is endless, as is her life, which seems more like a haunted afterlife.

Yoon navigates these testimonies with grace, tenderness, and care. Throughout the collection, she straddles a line between specificity and generality that allows the reader to reflect. In “Jin Kyung-paeng,” the speaker names her perpetrators:

With the specificity, she transforms and amplifies these personal facts from the speaker into more discursive knowledge. Contrastingly, in “Autopsy,” a speaker answers the question “Who did this to you?” with “You did, you did, you did, and you, and you, and you, / you did this to me in my home, you did this while crying. / I cannot make a sound as though my mouth is full of honey.” The generality of the you implicates the personal in the reader—the reader becomes complicit, becomes one of the yous mentioned. This is amplified in a later line: “you and I, our histories of hunting / and being the beast.”

A Cruelty Special to Our Species opens a door that invites the readers, in a recognition of complicity, to begin to mourn both that which we know and that which we don’t know. Yoon preserves these voices to reverberate into the world, into the present and future. In “Let Us Part Like This,” Yoon writes, “Let us speak these words louder / than pines cracking in the snow.” The voices of this collection are insistent—they speak louder and louder, urging us to listen, believe, and mourn. 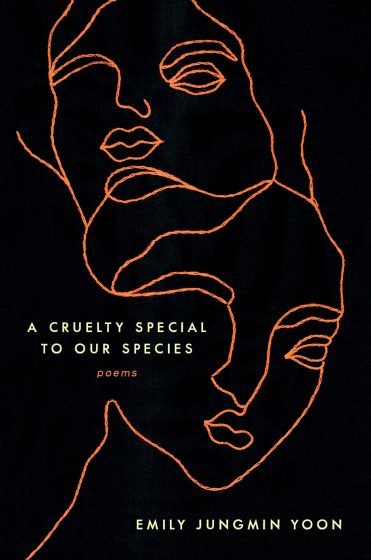 About the author Jennifer Huang

Jennifer Huang grew up in Rockville, Maryland to parents who grew up in Taipei, Taiwan. She is currently an MFA candidate for poetry in the Helen Zell Writers' Program. She also teaches as a Civitas Fellow for InsideOut Detroit, and reads poetry for Sundog Lit. Her poems have appeared tenderness lit, the Blueshift Journal, and other places.