Today we visit the Archives to share an excerpt of a story by Luisa Mercedes Levinson, which first appeared in Michigan Quarterly Review, Fall 2001.

Luisa Mercedes Levinson (1914-1988) published in 1955 a collaborative book with Jorge Luis Borges, La hermana de Eloísa [Eloisa’s Sister] consisting of two stories by her, two by Borges, and one they wrote together. The story that follows is from a collection of 1959, La pálida rosa de Soho [The Pallid Rose of Soho], much influenced by Borges. The editors are grateful to the author’s daughter, Luisa Valenzuela, herself an eminent fiction writer, for permission to publish this story.

I must hurry with this story because everything depends on the time required to tell it. And on you.

For the second time Elsa Grau felt the need to see The Pier in the Mist. It was being shown at a small theater near the port. She arrived at three-thirty in the afternoon. A pale, damp sun made her want to stretch. The river lurked nearby.

Elsa entered the darkness. Two other films filled up the wait and her capacity for wonder. In the second film the camera, as if in ambush, hovered over a cot that was used in shifts by a stevedore at night and by a woman in the day. When the woman left for work at nightfall, the man would come home from his job, and at dawn she would return and he would leave. And always the same rage and the struggle and the compulsion to lie down on that cot. The repose of each one gave the appearance of a respite between two alternating drunken sprees, but Elsa thought that the camera, in spite of the insistence of its focus, failed to capture the essential idea—that of the dream that had to continue without pause, that could never be interrupted, the infinite dream. And that that man and that woman who, with the birth and the death of the day (or the birth and the death of the night), cursed and beat each other for the possession of a cot were nothing but the means employed by that dream, which had to continue at all costs. Before The Pier in the Mist began, Elsa felt too tired to focus her attention any longer. It seemed to her as if her vital being had been swallowed by the darkness or by the make-believe, and the rest, perhaps the most essential part, was floating on the dusty air and was in danger of being devoured by the spectators. The candy vendors passing about looked at her too intently: Elsa ran out.

Night had fallen. Down her cheeks ran a few drops of rain. It struck her as odd that she had sensations: like feeling life when one is dead.

Common things seemed new and dazzling to her: the river, the port, a light. At that moment it was natural to go down the stairway toward a boat, to go on board, to look at the sleeping man and approach slowly and look again a little more closely. During this time, the raindrops kept running down her hair: Elsa sensed with delight the cold little streams coursing down her neck.

Elsa took a step; then one more; she saw what she had always desired and dreamed about: she saw a man’s dream, a true, living dream, with figures that moved and acted and followed a plan. Elsa wanted to know, to know. To what destiny, to what pattern did the dream figures respond? Suddenly, they stopped; those glances knew something about her, knew too much. Then a figure waved at her: it was a signal. And the others repeated it. They were calling to her; why? Elsa recognized the bloodied person who writhed in their midst. That bloody figure was hers, it belonged to her, it had been torn out of her own dreams.

That gesticulating group was not serious, it was now verging on the ridiculous, it seemed that it was performing especially for her. Elsa relaxed her guard. She advanced one step more. It was the definitive step: she had penetrated the circle of a dream…. 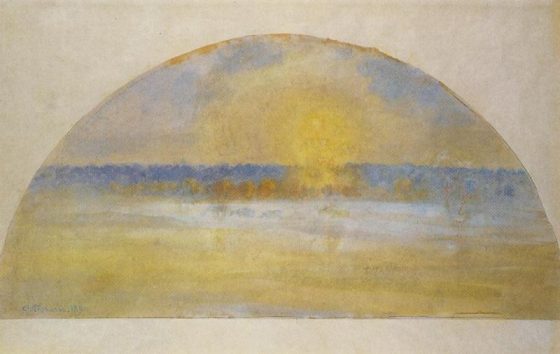 Read the rest of Luisa Mercedes Levinson’s story here, in our Archives.

About the author Luisa Mercedes Levinson

Luisa Mercedes Levinson (1914-1988) published in 1955 a collaborative book with Jorge Luis Borges, La hermana de Eloísa [Eloisa's Sister] consisting of two stories by her, two by Borges, and one they wrote together. The story that follows is from a collection of 1959, La pálida rosa de Soho [The Pallid Rose of Soho], much influenced by Borges.