MQR is delighted to announce a new project with Wolverine Press, with these words from Press Director Fritz Swanson:

Wolverine Press is pleased to partner with Michigan Quarterly Review on the first of what we hope will be many collaborative editions. As a sign of our commitment, we’ve bound our two letter marks between two bees; we are sisters in this sweet hive. 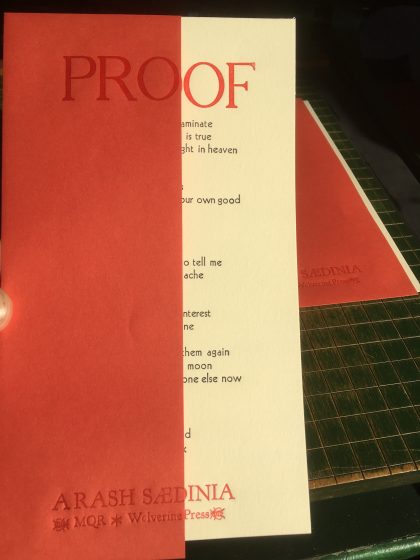 The poem “Proof” by Arash Saedinia has been set in 14pt Sans Serif Light, designed by Sol Hess in 1930. The title was set in 72pt Cheltenham, a letter originating in 1896, and developed by Bertram Goodhue, Ingalls Kimball and Morris Fuller Benton. The MQR and Wolverine Press lettermarks, and the author’s name, are set in Kennerley Old Style, designed by Frederic Goudy in 1911. The type (cast in metal) was set letter by letter, space by space in the traditional way by the Printer’s Devils of Wolverine Press. The poem was handprinted in two colors on Stonehenge paper, and the enclosure is constructed from paper made by the French Paper Company in Niles, Michigan. 100 copies were made for a single edition, after which the formes were struck and the type distributed.

Wolverine Press is a publisher that uses traditional letterpress printing techniques to produce limited-run paper ephemera in support of the programs and students of the Helen Zell Writers’ Program at the University of Michigan. This includes editions of poems, prose and art. The Press was founded in 2013.

The Press is staffed by MFA poets and fiction writers called Printer’s Devils, or just Devils. These students learn how to set metal type and print with it in the traditional way. They select, edit, design and hand-make everything The Press releases. This work is integral to their education as members of the literary community.

You can learn more about Wolverine Press, and see other prints we have made, at Wolverinepress.org. 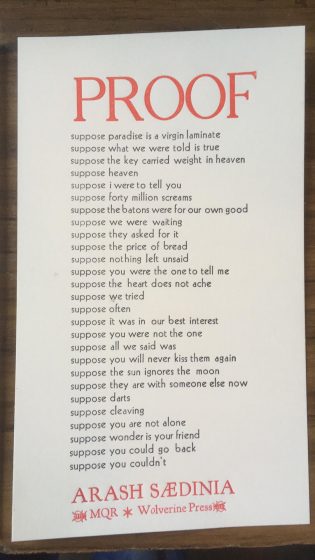 Wolverine Press letterpress prints, including “Proof,” are available for purchase at Pioneers Press.