Maintenance of DNA integrity is crucial for a cell to have a healthy life and for transmission of accurate genetic information to its progeny. Exogenous agents, including radiation or chemicals, as well as endogenous sources, such as reactive oxygen species or defects in DNA metabolism, pose threats to genome stability. Among the most dangerous DNA lesions are DNA double-strand breaks (DSBs), which if not properly and timely sealed can become sites of mutations or chromosomal rearrangements — well-known hallmarks of cancer and other genetic disorders1. The process of DSB repair is one of the most extensively studied mechanisms of DNA repair, yet much remains to be understood about its players and dynamics.
The DNA damage response (DDR) is a complex network of cellular pathways that detect DNA lesions and organize a response signal cascade to repair the DNA. In this issue of Nature Cell Biology, Michelini et al.2 uncover an aspect of the DDR in which RNAs are the directors. The study shows that sequencespecific RNA:RNA interactions orchestrate the DDR in response to DSBs.

News and Views pice in reference to the Walter Lab NCB paper (ref. 164 at https://sites.lsa.umich.edu/walter-lab/publications) 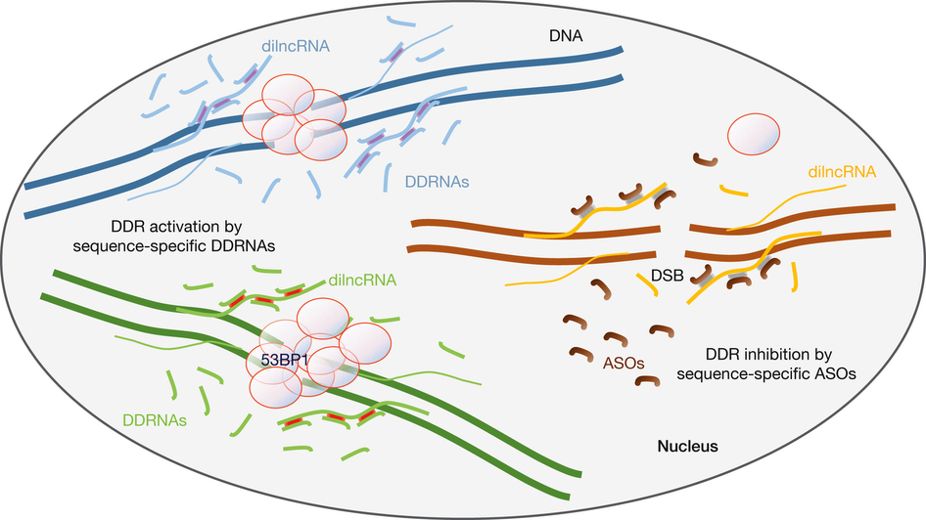 The drawing shows three different DNA DSB sites in a cell nucleus, depicted as interrupted, thick, parallel strands in blue, green and orange, respectively. The work by Michelini et al.2 suggests that every different DNA DSB site has its unique set of RNA:RNA interactions (shown as small, sandwiched, purple or red rectangles at the two DSB sites on the left) between its specific dilncRNAs and small non-coding RNAs termed DDRNAs (both shown as light blue, green or yellow lines), which originate from dilncRNAs at each DSB site. Such local RNA:RNA interactions are signals to activate the DDR by recruitment of the early DDR factor 53BP1 (transparent ovals). The dilncRNAs generated from DSB ends (thicker lines) were found to be more abundant than those generated towards DSB ends (thinner lines). ASOs can be designed to specifically block DSB repair at a chosen locus, without interfering with DSB repair at other loci within the same nucleus. Here, ASOs (shown as short, thick, brown lines) are specific to dilncRNA sequences of the DSB site on the right and block formation and function of DDRNAs at this DSB site by interacting (small, sandwiched, grey rectangles) with the complementary dilncRNAs.