An Ink Droplet in a Glass of Water: On “The Natashas” by Yelena Moskovich – Michigan Quarterly Review
Skip to content

Yelena Moskovich has drawn a number of comparisons to other artists, most notably, that of surrealist filmmaker David Lynch. In her debut novel, The Natashas (Dzanc Books, 2018), she weaves a kind of Lynchian flair with her own style to brilliantly expose the horrors and absurdities of artistic temperament, the human figure, and the sexual expectations we place on women in society.

The Natashas is not a novel with a traditional narrative. Instead, the book takes readers on a surreal journey into the heart of something more unsettling — a place where traditional narratives serve no purpose. Interludes pepper the story wherein Moskovich introduces readers to “The Natashas,” a group of battered, vulnerable women and girls stranded somewhere in space and time, locked away in the ether, perhaps no more than a figment of the wicked minds of men. For the most part, the book follows the stories of two characters: Béatrice, a buxom jazz singer attempting to reconcile her acclaimed voice with her coveted figure, and César, a Mexican actor who moves to Paris in an effort to find success and explore his gayness far from the judgement of his machismo-fueled brothers. Both characters amble through the Parisian streets searching for something, trying to understand their place in a strange and complicated world. 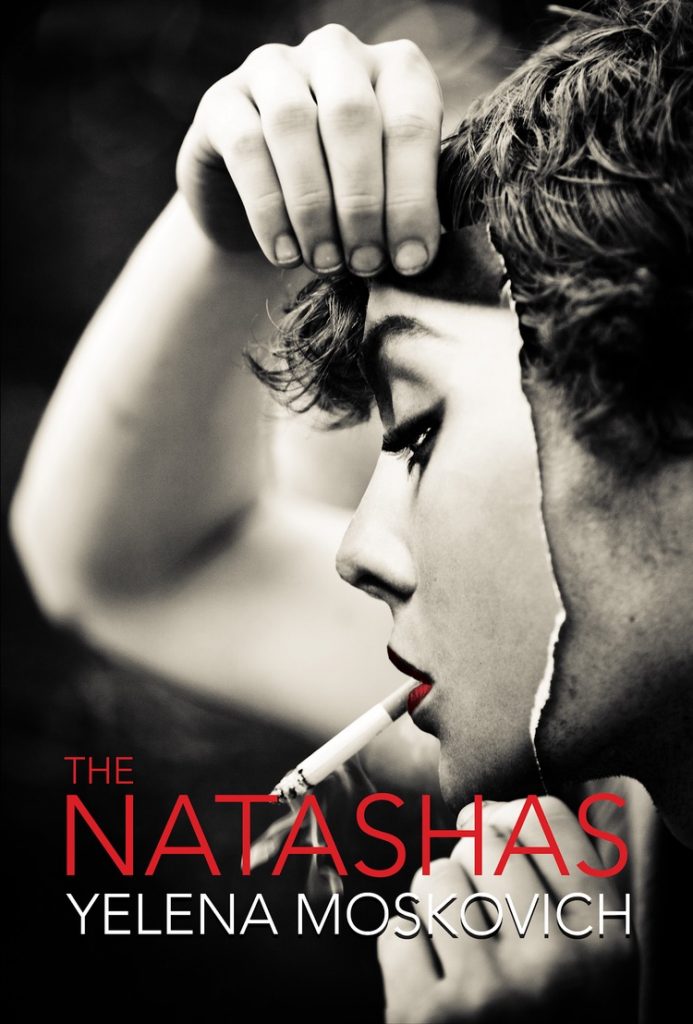 One of the recurring themes in The Natashas is the toxic effect of gender roles in society. This plays out through the sexual objectification of Béatrice (random men often gape at her, and her own family — and father — refer to her as “Miss Monroe” or “Miss Marilyn”), and also in the typecasting of César as a violent Latino man for a TV audition. Both Béatrice and César become lost within their roles, barred from allowing their genuine selves to exist — until they begin fighting back.

Enter Polina, a woman who seems to enter the narrative from a fog, as if willed by Béatrice’s frustration. Polina helps Béatrice explore her sexuality and though it is never made overtly clear, she might very well be the leader of the mysterious coterie, “The Natashas.” Before Béatrice ever comes across the character of Polina, she seems haunted by her presence:

“Polina,” Béatrice gasped into the mirror, then dropped her head. She grabbed the sides of the sink and spat. The cold saliva slid down the sink’s edge towards the drain, as if into a large porcelain ear. In the mirror, the warm breath disappeared into its own reflection.

César, meanwhile, often prone to inhabiting the acting personas he creates within his mind, continues to spiral into the violent inner machinations of the latest character from a recent, particularly intense audition. César, Moskovich writes, is “not interested in caricatures, false accents, vocal pretenses. His technique was rather to stay wholly within himself, and pull out from his own depths, like a white hair from a bowl of milk, the traits needed for his character.”

Each protagonist travels down their own path, unknowing and anxious, and all the while “The Natashas” hover somewhere nearby, just out of reach but never within sight. In true Lynchian form, nothing gets quite settled at the story’s conclusion, and there are more than a few questions left to be answered, but to linger on these is to lose sight of the bigger picture.

Perhaps one of Meskovich’s greatest gifts as a writer is a knack for clever turns of phrase, including gems such as, “In Russian, you don’t have to go missing. It’s a single verb. The verb sits next to your name and you’re gone.” Or take the description of a mischievous youth with “the look of a boy who’s hiding a beetle behind his back.” Often it feels as though Meskovich, who is not a native English speaker, has discovered quirks within the English language that only an outsider could have come upon, and the result is both beautiful and invigorating. Also delightful is when Moskovich takes a moment aside to question some of the peculiarities of English, as she does in this one particularly interesting self-contained passage: “To go missing. What a phrase. Do you realize? As if missing is a place one must get to. One day someone leaves their house, goes for a walk, and walks and walks and walks, until they get missing.”

Such vivid imagery infuses the text, evocative in a way comparable to the more surrealistic writings of Haruki Murakami. And throughout the text, characters grapple with a dissatisfying awareness of their bodies in the world:

Standing there, staring at the statue, César felt a doubting darkness begin to spread within him like an ink droplet in a glass of water. A list of things he didn’t like about himself came to mind. His flat, wide nostrils. His slit-thin eyes. The brackets his brows made when he was thinking. Once the surface was picked, the darkness reached beneath. There was something wrong with him, something strange, uncomfortable, underdeveloped, Der’s sumting about you dat make me wanna vomit, came his brother Raul’s voice.

Béatrice likewise struggles. Despite being a gifted singer, she has difficulty finding her voice, often opting to say nothing, let alone share her vocal talent. Then again, when her sister’s boyfriend becomes all-too enamored with her physical beauty, Béatrice screams at him — a first for her. The boyfriend delights in her reaction: “He put his forearm on the top of the gate, and leaned his hip in. He didn’t say anything because he didn’t need to. Life is delicious when you’ve made a beautiful woman yell for the first time.”

From the surrealistic imagery written with inimitable flair, to the biting grit of the story’s exploration of sexual objectification and self, The Natashas is utterly captivating. Lyrical, brooding, and delightfully dreamlike, the novel is a strange and ruthless journey into the ailing heart of humanity — and a bizarre peek into the mind of a brilliant new novelist.

Michael A. Ferro’s debut novel, TITLE 13, was published by Harvard Square Editions in 2018. He was named as a finalist by Glimmer Train for their New Writers Award, won the Jim Cash Creative Writing Award for Fiction, and been nominated for the Pushcart Prize. Michael’s writing has been published or is forthcoming in numerous literary journals and print anthologies, including Juked, Monkeybicycle, Crack the Spine, Heavy Feather Review, Entropy, Duende, BULL: Men’s Fiction, Vulture, Splitsider, and elsewhere. Find out more at michaelaferro.com or follow him on Twitter @MichaelFerro.