“The astonishment that the things we are experiencing in the 20th century are ‘still’ possible is by no means philosophical. It is not the beginning of knowledge, unless it would be the knowledge that the conception of history on which it rests is untenable.”

If our conception of history had marginalized communities at its center, we would know that crisis is the norm. But the rise of fascism, racism, and anti-immigrant sentiments in the twenty-first century still catches us unawares, which suggests that ethnic minorities, refugees, and other oppressed populations continue to remain at the limits of contemporary historical consciousness. This makes Go Home! (Feminist Press, 2018), an anthology edited by Rowan Hisayo Buchanan that places diasporic writers at its center, an urgent read for our times.

I came across Go Home! a few months after the property manager of my apartment complex in California said to me, “If you are not happy here, why don’t you go home?” The exchange had begun with her asking why my partner hadn’t visited in a while. I suppose it was an innocuous, albeit nosy, query — a variation on the “how is it going?” She wasn’t really asking for the messy details that impact an immigrant’s family life. But brevity isn’t a strength I can habitually count on, so I went on to describe, at some length, the bureaucratic steps and papers that stand in the way when a person of Indian origin — specifically, one in the process of becoming a citizen of another country — tries to enter the US. Like a vaulting acrobat who has left the ground but not yet landed, this person finds himself suspended mid-air.

In the conversation, I made no efforts to hide my strong misgivings about the rhetoric that accompanies immigration at present, with which I became intimately acquainted when I moved to the US — the rhetoric that normalizes setting obstacles, exacting prices from new immigrants, and at the same time, demands a degree of gratitude from those who “make it” despite (and not because of) the hurdles. For the property manager, my critique — a sign of the immigrant’s ingratitude — was the measure of unhappiness. She diagnosed my unhappiness to be the real issue and presented my return “home” as a viable solution. 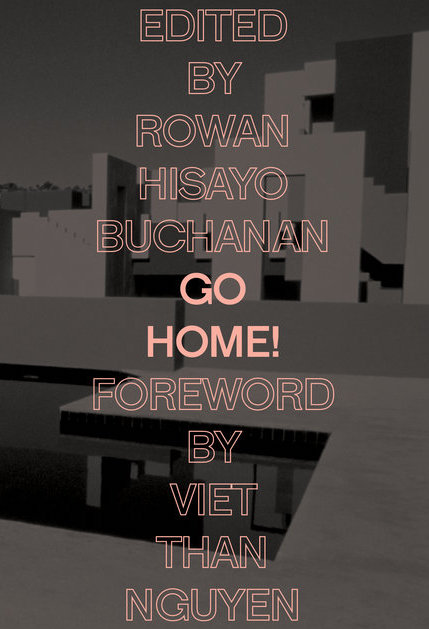 Home, I couldn’t tell her then, isn’t a solution, though it might very well be the problem that migrants are up against. Certainties about home and its absolute boundaries can be breeding grounds for xenophobia and protectionism. If this and only this is my home, then I might be inclined to wall it up, prevent others from staking a claim to it. In the foreword to Go Home!, Viet Thanh Nguyen observes that many former Vietnamese refugees, “comfortably ensconced at last within four walls,” are now opposed to the US admitting refugees from the Middle East. Such antipathy of old immigrants toward the new also raises the question of precisely when one comes to think of oneself as an “insider.” How and why does a particular place, time, or identity become “home”?

To my interlocutor that day, my home was the country, India, where I grew up. However, for me, such a singular, certain place to which I can return and be born again into a state of primal happiness does not exist, and in fact never existed. This absence of certitude about home — what it is, where it is, whether it is a noun or a verb, a being or a becoming — runs through the various essays, fictions, and poems that Buchanan collects in the Go Home! anthology.

The anthology’s title, of course, is a slur that people of color frequently encounter in the US, as is evident from the anecdote with which Buchanan opens her editorial note. The title provokes, and had the writings in the volume directly responded to the provocation, we would, perhaps, be left with narratives that stage over and over the suffering of those identified as “outsiders” by a political or cultural system. That is the burden of provocation — it demands defense. Luckily, though, most of the authors approach “home” as a more delicate and fraught notion than what the slur “go home” would have it denote. As a result, the volume does not culminate in a singular message; rather, it brims with insights drawn from everyday life. And even though the assorted writings are not uniform in their aesthetic complexity, each piece stylistically enacts at some fundamental level the absurdity of returning to a fixed time, place, or self that is “home.”

Alice Sola Kim’s short story “Mothers, Lock Up Your Daughters Because They are Terrifying,” one of my favorites in the anthology, is full of surprising revelations. Home is a collectively conjured, shape-shifting phantom in this story. In Alexander Chee’s essay, “Release,” whatever home may be, it is recognized only after the fact, when it no longer is. Nguyen’s foreword articulates the desire for what to some people may be an impossible home, “a home without walls or boundaries.”

It takes art, language, and stories to find and lose homes. Coming upon Rajiv Mohabir’s poem, “Kalapani,” in Devanagari script was homecoming to me in the moment. Gina Apostol’s “The Unintended,” which takes a dig at everything from high theory and Henry James, to Elvis and emojis and Tumblr, reflects on the acts of reading, interpretation, and translation as modes of engaging not only texts but also the world at large. Amitava Kumar’s “Love Poems for the Border Patrol” traces the author’s shifting relationship with his homes through the changing nature of his writings. As the author recalls the different phases of his self-fashioning, he infuses the essay with gentle humor and a healthy dose of skepticism about his own youthful rage and politics.

Some authors included in the anthology, such as Chang-Rae Lee, Kimiko Hahn, Alexander Chee, and Amitava Kumar will be familiar to many readers. And yet reading them together in Go Home! is a different experience. It reminded me of the phrase “diasporic intimacy” used by Svetlana Boym to describe the Russian-American artist Ilya Kabakov’s installations and immigrant homes. Diasporic intimacy, Boym said, “is not opposed to uprootedness and defamiliarization but constituted by it.” As the writings of the new and established Asian-origin authors speak to one another across the anthology’s pages, to borrow Boym’s words again, they share “the mutual enchantment of two immigrants from different parts of the world,” “the fragile coziness of [having found] a foreign home,” and “a surprise, a pang of intimate recognition.” I, too, felt this pang of intimate recognition on reading Go Home!, a book that reframed my memories and sensations.

Recognition and alienation are intimately entangled in an immigrant’s experience. On November 9, 2016, I remember waking up early in an Airbnb in Barcelona and bumping into my host in the hallway. “Your country has elected him, did you see that?” he said, shaking his head in disbelief. I understood what had happened, but I also saw the irony in this man’s recognition of US as my country — based, I suppose, on my Airbnb profile address — when the political tide in the US was explicitly turned against those like me, the immigrants. In Europe that autumn, suspended between India and America, I would be more readily identified with the latter country just when I was beginning to anticipate more-than-usual scrutiny at the border when re-entering the States. This sort of anxiety is not new or uncommon, especially among post-9/11 Middle Eastern and South Asian immigrants in the US, but this time I was additionally worried about the demonizing of immigrants in the run-up to the election.

The experience of alienation sets in motion subterranean changes. Fariha Róisín’s “Meet a Muslim” follows the ebb and flow of these undercurrents. She remembers the religion class in grade school in which she first realized she was Muslim. She remembers her sister reasoning, “the hijab is like a second skin. It’s protection from all of the earth’s toxicities,” when putting on the hijab two years after 9/11.

Family, too, is a point of focus in Go Home! Like home, family remains a fluid and contested idea. It brings with it not only a sense of belonging but scenes of misidentification. The quirks of family members allow authors to explore intimacies and differences with a light touch, as is the case in Mohja Kahf’s poem, “My Grandmother Washes Her Feet in the Sink of the Bathroom at Sears.” In “Bon Chul Koo and the Hall of Fame,” Jason Koo gives us a narrative in verse that interweaves a road trip, miscommunication within and outside the family, and history of movements. The narrative comes to an end with the speaker realizing that to commuters in a passing car, people that know nothing of his and his father’s present situation, they would simply be “Asians with a camera” — that is, severed from context, they are stereotypes. Anyone, he suggests, can be uprooted and un-homed in a moment through an onlooker’s gaze.

A blurb on the book’s jacket says the anthology “muses on the impossibility of the slur ‘go home!’” — and that is true, to an extent. However, the authors of Go Home! do much more than respond to a slur. The collection delights in detours on the way home. On this journey, what first appears to be a cul-de-sac turns out to be a vortex, as Chaya Babu’s brilliant, meandering essay would have us believe. What is home and what is not, we see, is ever shifting.

Torsa Ghosal is the author of a novel, Open Couplets (Yoda Press, India, 2017). Her writings have appeared in Catapult, Entropy, and Himal Southasian. She is associate editor of the South Asian literary magazine, Papercuts. Currently, Torsa lives in Sacramento, where she teaches contemporary literature and experimental writing. Find out more at torsaghosal.com, or follow her on Twitter @TorsaG.