View from inside a cistern, looking up the cistern shaft

The seaside location of Notion brought many advantages but suffered from a major deficiency: a complete lack of fresh water. One goal of the survey is to use a study of Notion’s water supply to help us understand how residents made the site inhabitable and to test the hypothesis that the city was largely abandoned by the early Roman period, only a few centuries after its re-founding. The survey has so far identified a network of at least a dozen cisterns, along with a number of stone pipe blocks, that demonstrate how the city’s inhabitants responded to this challenge. Our documentation of these structures includes making 3D models using a laser scanner and analyzing remote sensing date for signatures of subterranean water features. The cisterns are generally bottle- or carafe-shaped in section, expanding from a diameter of 1-2 m at the top to 3-4 m at the bottom, and extending down to a preserved depth of 5-7 m. They range in capacity from about 4.5 to over 50 m3 and are excavated from the two major types of bedrock on the site, schist and limestone. Most are lined with hydraulic mortar. In several cisterns the terracotta pipes for water intake remain in situ, laid above bedrock level below the large stone slabs used to build up and cover the cistern opening. They are located across the site, both in public areas, such as around the Agora and Theater, and in residential quarters. Since similar carafe-shaped cisterns are most common in the Hellenistic period, the construction of the cisterns at Notion likely corresponds in time with the period when the city was re-founded and enjoyed its greatest occupation, as suggested by the identifiable surface pottery examined so far, which dates only from the 2nd century BCE to the 1st century CE. Notion may also have been served by a running water supply, but no clear evidence of an aqueduct has yet been found. What is even more unusual is the absence of bath complexes and the very limited use of mortared rubble construction – both hallmarks of the Roman period. All of these clues suggest that Notion ceased to be a vibrant city after the 1st century CE. Research on the cisterns and water management at Notion is overseen by Angela Commito; the laser scanning is done by Christian Kurtze. 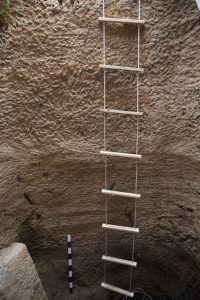 Interior of a cistern 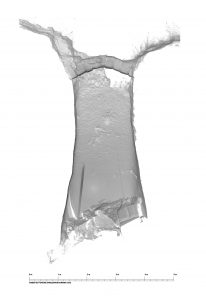 Section from a 3D model of a cistern, produced by laser scan 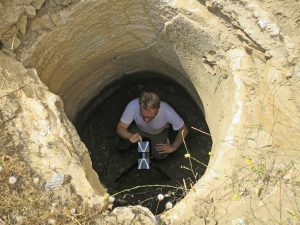 Christian Kurtze preparing to document a cistern with a laser scanner