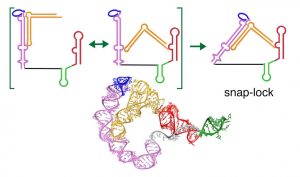 Using single-molecule imaging, scientists from Rice University and the University of Michigan determined that the T-box riboswitch that regulates production of glycine in Bacillus subtilis becomes locked into the “on” position via a snap-lock mechanism. The lock is engaged when an L-shaped arm of uncharged tRNA snaps into position. When the arm is “charged” with a glycine molecule, the arm cannot lock into position, and the switch remains “off.” (Image courtesy of E. Nikonowicz/Rice University)

Finding by Rice, Michigan chemists could point way to new antibiotics
HOUSTON — (May 21, 2018) — In a discovery that points to potential new antibiotic medicines, scientists from Rice University and the University of Michigan have deciphered the workings of a common but little-understood bacterial switch that cuts off protein production before it begins.

Many gram-positive bacteria use T-box riboswitches to regulate production of proteins that utilize amino acids, the basic building blocks of all proteins. A study in Nature Communications describes how one of these switches, a glycine regulator in Bacillus subtilis, flips and locks into the “on” position via a snap-lock mechanism. Engaging the lock increases production of proteins that utilize glycine, the simplest amino acid. Researchers also detailed the switch’s “off” position: A single glycine at the tip of the locking arm blocks protein production.