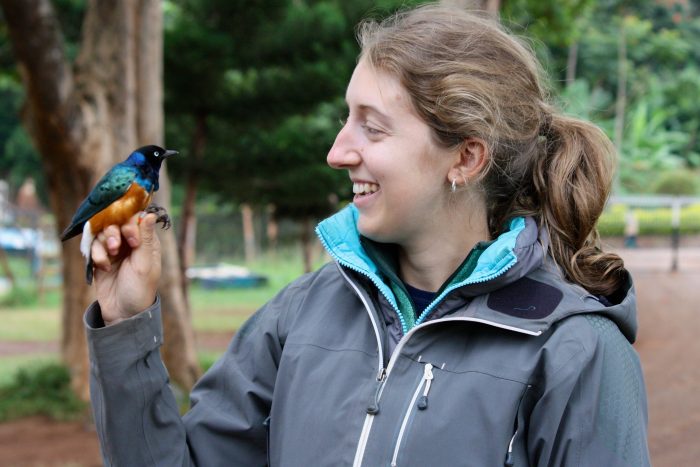 Sarah Guindre-Parker is a behavioral ecologist whose research integrates across ecology and physiology to understand how animals cope with changing environmental conditions. In particular, her research has focused on how fluctuating environments shape reproduction, survival, and life-history trade-offs. Sarah joined the team in the fall of 2017 as an NSERC Postdoctoral Fellow based at the University of Guelph (2017-2019) where she is co-supervised by Andrew McAdam. She is studying how fluctuations in population density and food abundance have shaped the physiology and fitness of North American red squirrels (Tamiasciurus hudsonicus) as a part of the Kluane Red Squirrel Project. A long-term food-supplementation manipulation in our study population has eliminated the drastic fluctuations that typically occur in squirrel density, and Sarah is testing whether this experimental natural selection alters physiology and fitness. Her work is also exploring potential carryover effects of living under constant vs. fluctuating density by looking at parental and grandparental effects of density and food abundance on offspring growth, physiology, and fitness.

Sarah’s interest in animal behavior and physiology began during her BSc at Simon Fraser University where she studied physiology and life-history trade-offs in European starlings (Sturnus vulgaris). She pursued her MSc at the University of Windsor with Oliver Love exploring achromatic plumage signalling and physiological costs of territory defense in Arctic-breeding snow buntings (Plectrophenax nivalis). Next, Sarah completed her Ph.D. at Columbia University with Dustin Rubenstein on the costs and benefits of breeding cooperatively in fluctuating environments in African starlings. It is while working and traveling in Kenya that she became interest in how organisms cope with drastic and unpredictable fluctuations in their environments.