Snowfall in early December, 2017 at ESGR The U of Michigan Sustainable Living Experience held a Retreat at the ESGR on October 14-16, 2017.  Emily Canosa, assistant director of the program, shared this summary and some images with us.

“We left the SLE Retreat at the George Reserve feeling energized and excited to do more work to further sustainability on campus and beyond! Even though it rained nearly the whole weekend, we laughed a lot, wildcrafted and prepared cranberries and autumn olives, planned sustainability projects, and were exposed to new faculty and research projects connected with the Reserve.” 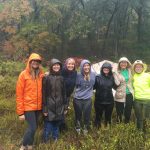 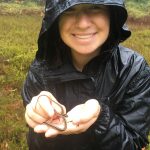 A snake finds a friend 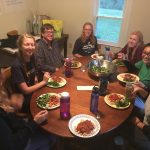 The fruits of our labors! 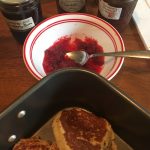 IMAGERY ADDED !!
Have a look at the new images posted, courtesy of Ian Kinney, taken by a drone of selected sites at ESGR (select Data Resources and Imagery from our main Menu)
FUNGI !!
On the weekend of September 30 to October 1, the ESGR hosted the Biology of Fungi course, led by Tim James and Rob Powers.  They had an excellent trip.  “We found that even in dry times, we were able to collect a large number of interesting mushrooms, including Ganoderma applanatum (the artist’s conk), Ischnoderma resinosum, and down in the bog (Buck Hollow) we found Suillus pictus and a Cortinarius.  We are looking forward to visiting again after some heavy rains.”   — Tim James On September 23, the EARTH/ENVIRON 442 (Earth Surface Processes and Soils) class visited ESGR to examine the importance of topography and plant communities as factors impacting soil formation by visiting bog, marsh, and forest (flat and hillslope) sites. Students also collected soil cores from each of the four sites for subsequent lab analyses of soil leachates to look at what nutrients or anions the iron in the soils are associated with, as well as plant samples from the three most common plants at each soil site. Back at UM, students will look at carbon and nitrogen leaf economics and their carbon isotopic composition to examine the relative contribution of different plants to each soil.

We are awaiting more images from the class, but for the moment, here is Bodhi who went along for the Buck Hollow portion of the trip and found cranberries all by himself!

September 9, 2017 marked an important day for ESGR as the Department of Ecology & Evolutionary Biology held the first EEB Retreat at the Reserve.  This annual fall event alternates between the UM Biological Station and a southern Michigan site, but this was the first time at the ESGR.

Field trips in the morning and afternoon were led by Diarmaid Ó Foighil, Anton Reznicek, Catherine Badgley, Ben Winger, John Vandermeer, and Tim James on aquatic animals, plants, geology, birds, ants and forest dynamics, and fungi.  A mid day repast was followed by discussion of which items will be sequestered in the time capsule that will be planted under the new Biological Sciences Building, beneath the feet of the black stone cats gracing the entrance.   Then Chris Dick, former ES George Director gave a rousing historical account of the Reserve and a view of the future challenges we will face, including a fiery battle against invasive plants.  The EEB Diversity Committee led a thought-provoking discussion of the book The New Jim Crow that almost held more attention for the participants than cocktail hour!!   Dinner provided by Satchel’s barbeque was enjoyed while filling plastic cups from a hose attached to a strange metal barrel. See more pictures at this link:

Our sincere thanks to the people who made this a successful event: Cindy Carl, Carol Solomon, Alex Wenner, Dale Austin, all the field trip leaders, and members of the Retreat Committee: Tony Reznicek, Wes Bickford, Haiqing Xu, and Robyn Burnham.