Other Worlds Inches Away: An Interview with Neil Gaiman – Michigan Quarterly Review
Skip to content

It is difficult to make generalizations about Neil Gaiman’s books. His contributions to practically every literary genre have earned him a place in the Dictionary of Literary Biography as one of the top ten living postmodern writers. His work has been honored with many awards internationally, including the Newbery and Carnegie Medals. His books and stories have also been honored with four Hugos, two Nebulas, one World Fantasy Award, four Bram Stoker Awards, six Locus Awards, two British SF Awards, one British Fantasy Award, three Geffens, one International Horror Guild Award and two Mythopoeic Awards.

I have to admit, about ten minutes before this interview began I had one of those last minute panic attacks. Would there be enough time to ask him about The Sandman (his series widely credited with reinventing comics), American Gods, Stardust, Coraline, The Graveyard Book, The Ocean at the End of the Lane, or any of his other works of prose, poetry, journalism, film, television, drama, and song lyrics? In the end, the only thing to do was to get out the way and just listen.

[Continued from The Literary Review]

In terms of drafts, I’m wondering, do you ever have a fear of overworking? Or do you ever have a fear, because you say you throw away things that have been extraneous. But sometimes there’s something quite lovely in that beginning process. And that it’s spontaneous, it’s what you’re doing when you improv, right? And is there ever a fear that through the second, through the polish, that you will lose that, I don’t know, the child-like beginning?

No, I never worry about that. I worry about getting lost in the woods of the story. But I never worry that the second draft is going to kill what works in the first draft. Partly because normally the distance from my first draft to my second draft is five percent, but it’s the really important five percent. The first draft you start somewhere and you keep going. The second draft you just make sure that everything is what you meant, and you notice the things that you miss as a reader. And the things that you miss as a reader, you fix as a writer.

But, you know to go back to your original question, do I worry about writing too much? Oh yeah. Years ago, I wrote a thing called “A Writer’s Prayer”, and it’s, let me see if I can find it… Here we go. This was something that I wrote, probably in about 1989, when I could see there were two futures and it was a writer’s prayer, and I wrote, “Oh Lord, let me not be one of those who writes too much, who spreads himself too thinly with his words. Diluting all the things he has to say like butter spread too thinly on his toast, or watered milk in some worn out hotel. But let me write the things I have to say, and then be silent till I need to speak. Oh Lord, let me not be one of those who writes too little. A decade man, between each tale, or more, where every word becomes significant and dread replaces joy upon the page. Perfection is like chasing the horizon; you kept perfection, gave the rest to us. So let me know when I should just move on. But over and above those two mad specters of parsimony and profligacy, Lord, let me be brave. And let me, while I craft my tales, be wise. Let me say true things, in a voice that’s true. And with the truth in mind, let me write lies.”

That’s nice, that’s very beautiful. I think it’s a creative writing course in its very compressed form. So, it’s touching. I know that you’ve done teaching, you’re not teaching at the moment?

I am taking a year off from teaching to write because I love the teaching, the teaching is really fun, but I couldn’t believe how much time it sucked. And how much of my head it sucked, and it’s like OK, if I’m going to get a novel done in a year, when I have a new baby, I can’t do that and teach as well.

Well, you’re teaching now, your baby, so it’s a one-on-one course. So, I was interested as you said, you began with the Douglas Adams and then the Terry Pratchett collaboration, what made you go to Sandman? I don’t know the exact chronology.

The chronology is weird. What I wanted to do through most of the mid 80s is comics. I’m fascinated by comics. Comics seems to me a place where people haven’t been. Novels, for better or for worse for me, feel like cultivated fields. You know you look out over the novels and it’s like looking out over gorgeous farmland. People have been working it for centuries, people smarter than you were out there, growing their crops and things hundreds of years ago and thousands of years ago.

Comics felt like the jungle. There were things where I could go, “Nobody’s ever done this.” I could go and do things that nobody has ever done before, and that was really kind of exciting. So that was where I wanted to be, but I also had to feed myself, so Don’t Panic, the Douglas Adams book, was a book that I was writing while doing some comic stuff. I had been a journalist, and I was friends with Terry Pratchett anyway. He’d phone me up and try ideas out on me. We’d talk. And then, essentially the sequence was, I wrote the Douglas Adams book. After writing the Douglas Adams book, I went, “You know, I could do this English-humor style. It’s really fun, and it’s very, very easy.” And I wrote the first five thousand words of what would be Good Omens. And then, Sandman happened.

So, I went off and worked on Sandman and about a year into Sandman, I got a phone call from Terry Pratchett saying, “Hey, that thing that you sent me. Are you doing anything with that?” I said no. He said, “Well, come on, do you want to write it together?” And I said sure. So, somehow, that was actually the hardest I think I’ve ever worked. There had been two times which were as hard, but writing Good Omens while I was also writing Sandman and The Books of Magic. That was hard, that was like, you know, you do your page count on Sandman and then do your page count on Books of Magic and then I would write Good Omens and then I would go to sleep and it would be four or five o’clock in the morning and I would get up at one o’clock and I would do it all again.

The only time I think things ever got that mad were finishing Neverwhere, where I went off to a hotel in Laguna Beach in California, which was just somewhere that my travel agent had found for me to go, and I was doing six- or seven-thousand words a day. Which is something you can always do for one day, but the end of the week, I’m not sure that I was sane anymore. But anyway, so I wrote Good Omens while Sandman was being written, while all of this stuff was being written. It was a glorious mad time, and I’m so glad looking back on it that I was twenty-eight and had relatively inexhaustible energy and was incredibly good at multitracking, because now I’m not, nowhere near as good.

But it gets back to that thing that you were talking about, about letting the project take its own shape. When you’re working on so many things at the same time, there’s this kind of intelligence of momentum, which is nice. But you were talking about comics and being able to experiment in a younger art form. But it seems like in your novels in the fantasy realm, that really is open for more — I mean, that’s a place you have more freedom compared to the conventional novel.

I think that’s probably true, as well. But I think it’s also a sad truism of fantasy that on the one hand, the fantastic in literature should be the place where you are most free to create. But I also think it’s true that it is very, very easy for fantasy to become pretty much the most formulaic form of literature. 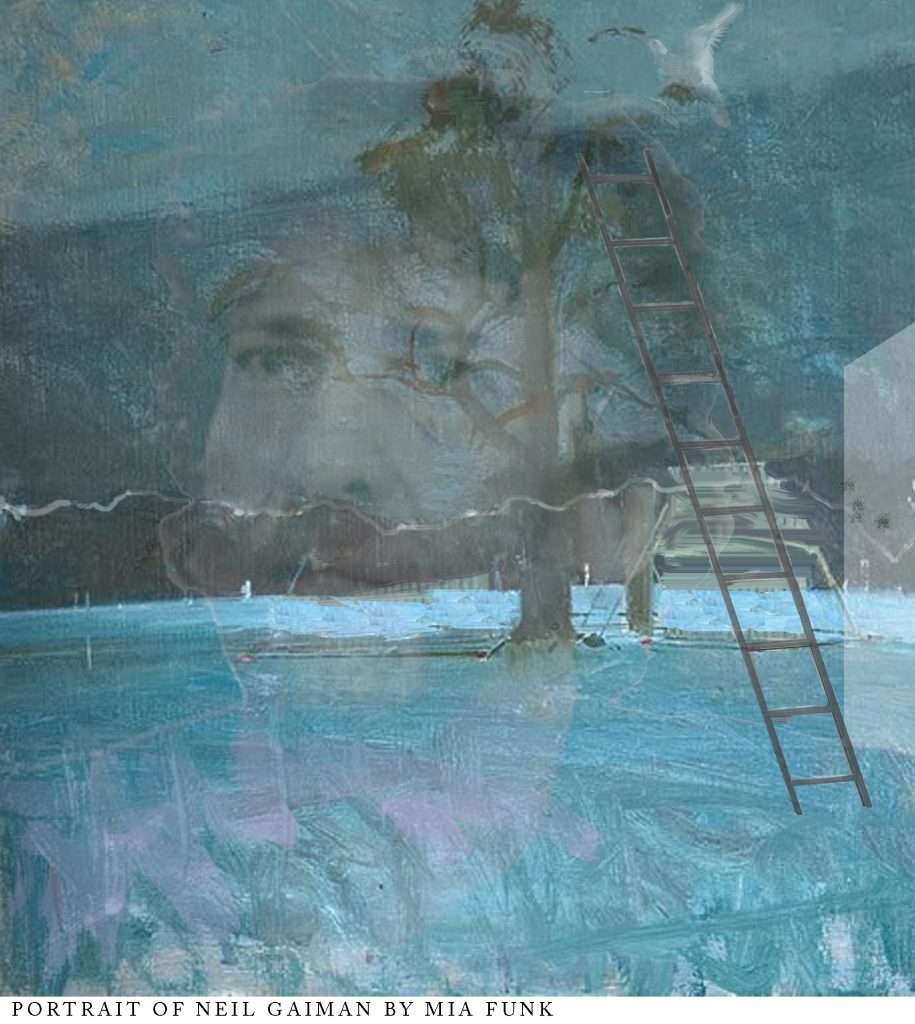 But you had a specific kind of voice and a specific kind of writing and that for me was what Stardust was, sort of in my head it’s written in about 1924. And I watch fantasy readers get frustrated with it. Some of them loved it, but some of them are just like why is this, this thin novel? Why are things alluded to that anybody else could turn into a trilogy? Why didn’t you make it big? And it’s sort of like, you know, the things that they expect to be there, aren’t.

That’s what I like about them, too. I don’t have much interest in formula fiction. I have a lot of interest in using the fantastic in all its ways to illuminate. G.K. Chesterton talked about, you know, reflecting things. Like fantasy becomes a mirror and you can look in the mirror and see things in the place that you are that you’ve never seen before, you’re just seeing them from a different angle. And for me that’s what The Ocean at the End of the Lane was for, that’s what American Gods is for. You know, that’s what even something like Neverwhere is saying — “Look, here is a city and you think you know your city, and let’s look at what cities do and what cities are. Let’s look at all the people who fall through the cracks, let’s talk about people you do not see and what is that? What’s going here? Tell me about that.”

And you want to start a kind of a weird — a dialogue, almost, with your readers.

Editor’s Note: This interview is part of a series. MQR is honored to participate in The Creative Process, an exhibition and international educational initiative traveling to leading universities. As part of the exhibition, portraits and interviews with writers and creative thinkers are being published across a network of university and international literary magazines.

Mia Funk is a multidisciplinary artist, interviewer, and founder of The Creative Process, an exhibition and international educational initiative traveling to leading universities. Over one hundred writers and forty universities are taking part in this project, including George Saunders, Hilary Mantel, Joyce Carol Oates, and others. Funk is currently painting portraits of the authors for the American Writers Museum. Find out more about The Creative Process, including how to get involved, at creativeprocess.info, or follow them on Twitter @CRprocess.