To See More Clearly: A Review of Jacques Rancourt’s “In the Time of PrEP” – Michigan Quarterly Review
Skip to content

Jacques J. Rancourt’s new chapbook In the Time of PrEP (Beloit Poetry Journal, 2018) is a stunning exploration of what it means to live as a queer man today “on the other side of catastrophe,” a generation after the AIDS crisis. Turning the frame onto the present generation, these poems address what it means to inhabit a present that might be inclined to distance or repress the impulse of this text, to fully reckon with what happened to queer lives only decades ago.

Nodding to Gabriel Garcia Marquez’s Love in the Time of Cholera, Rancourt’s chapbook engages with the devastating effect of disease on love and on collective and personal memory. The poems examine the emotional and spiritual overlap between past and present, as in one the poet catches a glimpse of “some paranormal visitor, some queer saint” in the symbolic visual of rainbows, refracted light. As the poet reminds us, “Nothing has ended; what has happened before / will happen again.”

With a patient eye for visual and emotional detail and connection, these poems dig into the thin line between observer and participant, though never voyeur, merely noticing patterns as they recur. And the past that these poems seek is always present, in plain sight. When the poet notes “Two wet cormorants filling the branch of one tree,” that sharp image opens a door through which he also sees “That six hundred thirty-six. / Thousand of us died & I did not. / Know a single one,” a lament emphasized by the syntactic fragmentation.

Eduardo C. Corral pointed out the “attentive[ness] to the spiritual and the carnal” in these poems; as in his first collection, Novena (LSU Press, 2017), Rancourt again gorgeously draws on Biblical imagery to attend to the risk and joy of desire, seen everywhere in nature, in the smallest of moments: “that pleasure could poison….Termites eat out / the tree’s giant heart.” And if, as we often find in these poems, all moments in time are intertwined or echoes of one another, how does God relate to that time? The poems allow that mystery to stand: “But God, who lives outside of time, / does not understand / the way time works.”

We might traditionally assume the (personal/subjective) interior and (objective/grounded) exterior to be split, a false binary of sorts; the flexible toggle between the two in these poems both performs that division and emphasizes how they construct one another, even merge to intensify emotional tone. In that movement, there’s a tender circularity, an awareness that eras and moments can and should linger on in language, and that this act of witnessing is essential. As part of this lingering in discovery, the experience of time as a fermata, the speaker situates himself again and again both in his own temporal moment and in relation to the past. Take one of the most sonically and visually gorgeous poems in the chapbook, “At this Hour”: 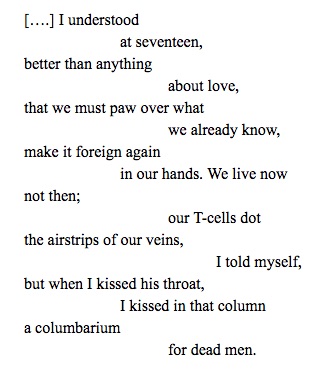 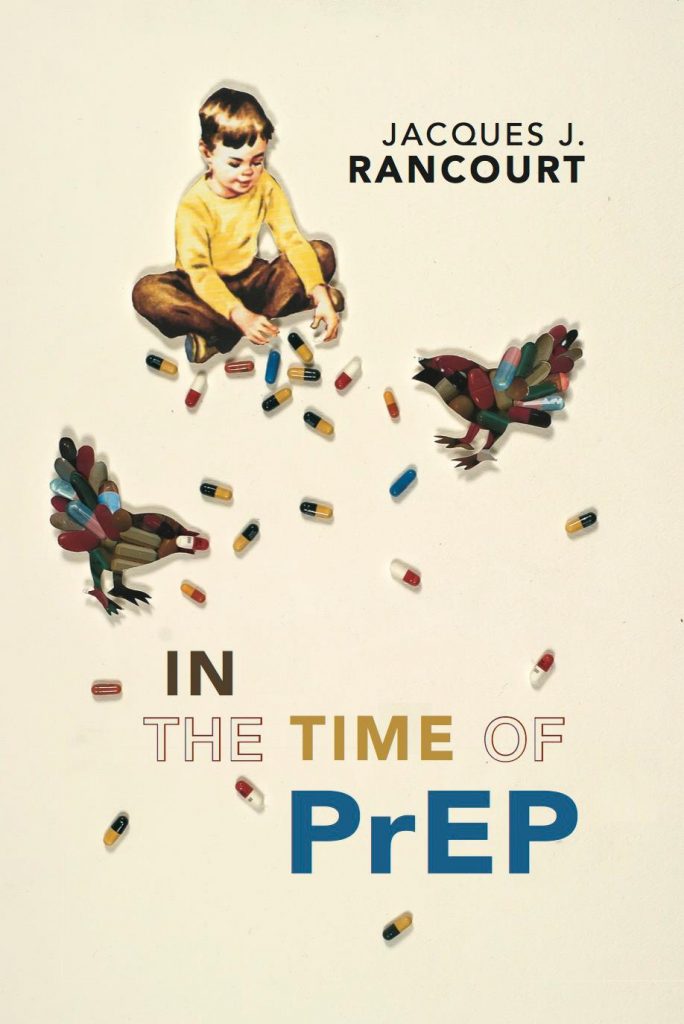 The poem’s unfurling motion across the page mirrors the almost-cinematic toggling, reframing, and refocusing occurring within the speaker. These poems traverse great distances within the psyche, just as there are often clear syntactic and structural shifts from poem to poem, for example, from compressed stichic to sprawling tercets, each poem defining its own structure anew.

In all this movement, the external landscape is almost always named and essential, reminding us that “there’s no queer pastoral for a reason” as we move from intimate settings like beds or bathhouses to the cityscape of San Francisco’s cathedrals, memorials, the celebration of a pride parade: “In these streets you marched, / we march from one club to the next, / bored on mojitos.” The highly visual “eye”/“I” also ventures to places where memories of violence, loss, or life lurk, for example, “Back East where I grew up, / the past still persists / sinister as a forest.”

And where does all this motion lead? The poems articulate the ways in which any moment in time is a potential fulcrum on which personal and collective identity can turn. The poet self-interrogates, “Who would I have been back then?” Later, he thinks of his partner and his marriage had they been born twenty years ago, wondering, “Would I / have kept by your side, faithful / as night, while you dwindled / into bed sheets?” He then rhetorically motions: “but what does this have to do with God? / I was careless, yes, & spared.”

This relentlessly interrogative voice makes the stakes inescapably clear, the imperative of pursuing memory in lieu of complacency, however comfortable the latter may seem: “there’s a word for what we lose / when we gained / our utopias.” The chapbook closes on another move towards discovery and memory, past and future at once: in a bathhouse, we see men from the past as though through a screen, “half / in this world, half in another. & for a long time, from behind / the grate in the grill, I watch them.”

Erika Nestor is an MFA candidate in poetry in the Helen Zell Writer’s Program. She also earned her BA in English and Creative Writing from the University of Michigan, where she was the recipient of a Hopwood Award and the Roy W. Cowden Fellowship. Pre-MFA, she worked as a technical writer at a medical software company in Wisconsin.