The Language of Difficult Stories: An Interview with Chaya Bhuvaneswar

Chaya Bhuvaneswar is a practicing physician and writer whose work has appeared in Narrative Magazine, Electric Literature, The Rumpus, Tin House, Michigan Quarterly Review, and elsewhere, with poetry in Natural Bridge, Quiddity, apt magazine, Hobart, and elsewhere. She is a MacDowell Colony fellow and has received scholarships to the Muse & Marketplace as well as the Squaw Valley Writers Workshop. Bhuvaneswar’s debut collection, White Dancing Elephants: Stories, is the winner of the 2017 Dzanc Books Short Story Collection Prize and was published in October 2018.

A rousing and thrilling read, White Dancing Elephants explores the complexities and brutality of racial and sexual violence through intricate relationships between family, and intimate friendships between women of color. This interview was conducted over email.

The stories in White Dancing Elephants are diverse in terms of setting, social class, age, race, gender, and sexual orientation, but united by the theme of navigating the different dynamics of racial, cultural, and sexual violence. I’m curious about your writing process for this collection. When writing these stories, did you have this theme in mind beforehand or did it arise from an investment in telling the stories of people of color?

I did and didn’t know in advance. If anyone had asked me “What are your stories about?” at any point over the ten years I spent writing these stories — often writing them when I sat down to “just write something,” not knowing what would come out — I would’ve said, “Race. Queerness. Sex. Mythologies.” But only after I’d written and published several did the stories start speaking to each other. Like the title story, “White Dancing Elephants” — a story told by a woman facing loss, cherishing a baby she’s lost — is somehow in dialogue with “Talinda,” which first appeared in Narrative Magazine and evolved from intense feelings about how much some people, both women and men, can yearn to have children. 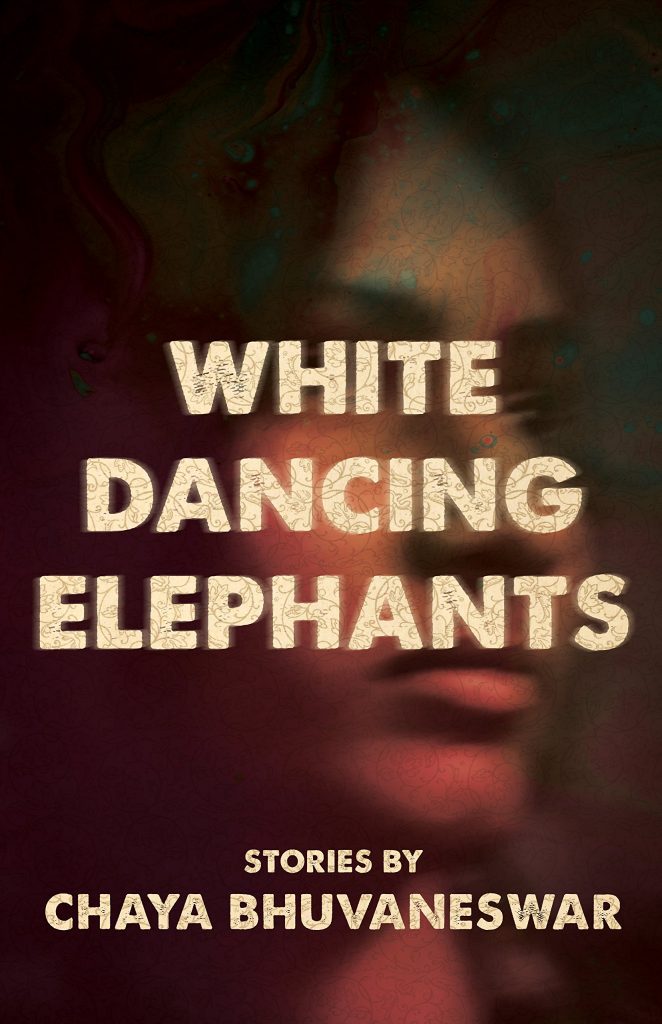 “Jagatishwaran,” told from the perspective of a trans/mentally ill artist, offers a different way of looking at the family dynamics, between a young woman with mental retardation, and her immigrant father, in “The Goddess of Beauty Goes Bowling.” These two last stories, by the way, were only written with specific characters and specific events in mind, yet both ended up presenting views of what it is like to experience violence as a person with a disability — a vulnerability that is absolutely not the same as powerlessness.

One of the most striking stylistic elements of White Dancing Elephants is the intimacy with the characters that is sustained through the different narratives. The effect of that stylistic approach teases out, I think, the kinds of experiences that are oftentimes “unspeakable” or difficult to name, label, and narrate. I see an affinity between your collection and the works of Toni Morrison, Margaret Atwood, and Sandra Cisneros in that, in their narratives, they are masterful at sustaining an intimacy with characters whose otherwise tangible existence, or beingness, could suffer from the weight of the unspeakable and inconceivable nature of the events they experience in the plot.

There’s a line from the narrator of “Orange Popsicles,” one of the stories in the collection about a young immigrant woman of color who is gang-raped by white athletes on a college campus, which I feel captures this sentiment: “like so many choices in life, like even coming to the US for her studies, the instant of cheating felt both unexpected and inevitable.” Could you speak about how the seeming inevitability of traumatic events often emerge as a corollary to their brutality in the very moments that an attempt is being made at communicating or expressing the invisible impact or weight of that trauma? What might that say about how fiction, or the act of telling stories, handles that impasse?

That’s a very rich and generous way of thinking about the stories, including that story, “Orange Popsicles,” which I must admit was based on real events that I was a close witness to in college — I knew a young woman of color who was gang-raped by white basketball players, whose very progressive, activist, and feminist roommate shut many of us out who hadn’t been part of her particular group of women activists on campus, for whatever reason. I never forgot how the woman who’d been assaulted remained defiantly seductive and alluring after the rape, rather than hiding or seeing herself as “punished” by having been raped, which is a Hindu way of looking at misfortune (and maybe not specifically Hindu alone). I’ve always been inspired by her. By the fact that coming to our college, as an overseas student, she refused, just by being visible, outspoken, unapologetically sexy and beautiful, to accept a place at the “margins.” She demanded attention and respect, and didn’t stop demanding it even after being raped.

I do feel (and this helped me persevere, in completing the collection) that stories of trauma endured and resisted by people of color, particularly women of color, have been silenced so many times that there is value in telling these stories, however imperfectly. That feeling gave me the courage to at least set down the stories, to make a start. Then reading many of the authors you mentioned, and also Louise Erdrich (whose novel Tracks remains a touchstone to me) as well as Alexander Chee (whose novel Edinburgh I wrote about for the journal aaduna recently), gave me a different vantage point on the material I’d at first only sought to tell. Reading those writers, including writers of color, but also Margaret Atwood and A.S. Byatt — futuristic, speculative writers — I found a way to expand the voice telling the stories so that it wasn’t just a single story but multiple kinds of story, including some stories within a larger frame like in “The Story of the Woman Who Fell in Love with Death.” That held surprises for me as the writer even though I was the one telling the story.

Many of the stories in your collection are set in what are sometimes referred to as Global Cities — New York City, London, San Francisco, etc. Are they places that are especially important to you? Where were you when you wrote “The Bang Bang” (featured in MQR’s Fall 2017 issue), for instance? 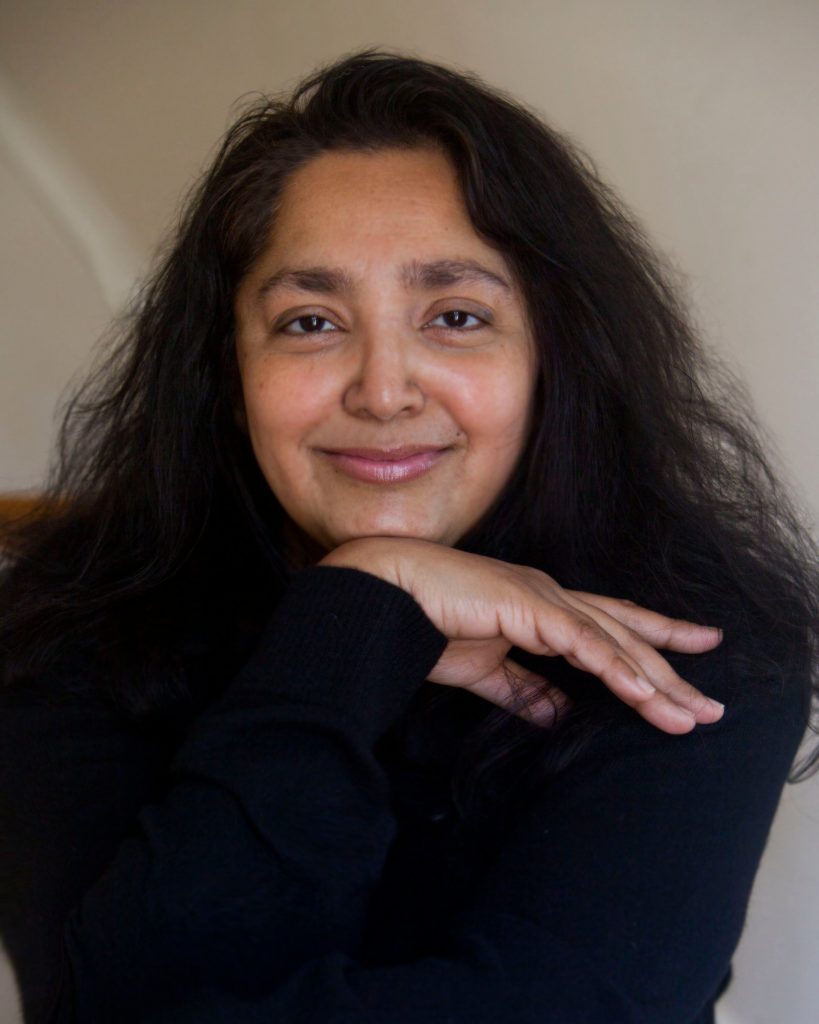 New York is where I grew up, so there’s a primal, at times unwilling, affiliation there — though definitely not with “glossy,” competitive New York, which as a child I called “the city.” I have a strong identity as an outer borough kid, an outsider who took the subway for a ninety-minute commute every morning and evening to and from Flushing to the Upper East Side, all the way up into Harlem, where the high school I went to was at the border and the next stop would’ve been 125th Street. (I’m very proud to say I went to the same high school, part of the same system, as Audre Lorde and (many years later) Lin-Manuel Miranda). Other places central to me include Cambridge, where I trained as a physician, and the Boston harbor, where I got married.

The stark geography of the Massachusetts coastline, which Jhumpa Lahiri so beautifully describes in her story collection Unaccustomed Earth – that’s a set of landscapes and seascapes that has really grown on me. Finally, places I’ve lived knowing I would only be a visitor, but thoroughly enjoyed: London and Oxford, cities in the title story “White Dancing Elephants” where I lived as a Rhodes Scholar for two years, and where I cherished being automatically part of a sizeable and vibrant South Asian community; and the Bay Area in California where I completed medical school. I’ll be reading this spring in both these places, London and Stanford/San Francisco, in testimonial to the way I found my “tribes” in those places, even though I knew I’d eventually move back East.

And the South Asian context of the collection?

Notice I did not say “India” right off the bat, even though there’s a distinctly South Asian context to most of the stories. But I think certain linear, nostalgic stories of immigration, from India to the US, have been so co-opted by “readers looking for curry” as the brilliant literary historian Naben Ruthnum wrote recently.

I knew none of my stories were going to be a “curry” story; like Jenny Zhang recently pointed out in how she came to write her beautiful collection, Sour Heart, I did not care if my stories of people agonized by trauma, loss, and sexual violation made readers uncomfortable by failing to present images of “good immigrants.” My favorite comment about the collection thus far is from the wonderful writer Diana Abu-Jaber, who found a “dark music” in the stories when she read them.

What’s next for you?

Hopefully, the novel I’m working on, plus an essay collection to which I’m truly grateful for wonderful editors like Sari Botton at Longreads, Lydia Kiesling at The Millions, and Leonora Todaro at Off Assignment. Their ability to see the potential in various personal essays has made me write … a lot more essays, for instance “Hot Asian Babes” and “White Dancing Elephants on Portobello Road.” I am extremely grateful to have connected, through this collection, to a diversity of readers across age, ethnicity, and sexual orientation, and hope so much they’ll stay with me for my next books.

Vickie Annette Masséus is a Ph.D. candidate at St. John’s University in Queens, NY. Her research explores the unique interventions of Caribbean literary language in larger categories of inquiry such as postcolonial studies and modernist studies. Her current project examines the linguistic/formal dimensions of Caribbean literature to explore the unique ways Caribbean literariness theorizes difference in another way. When she’s not teaching or writing her dissertation, she blogs about literature, language, and culture.

About the author Vickie Masséus