With Care: An Interview With Franny Choi – Michigan Quarterly Review
Skip to content

Franny Choi is a queer, Korean-American poet, playwright, teacher, and organizer.  She is the author of two poetry collections, Soft Science (Alice James Books, 2019) and Floating, Brilliant, Gone (Write Bloody Publishing, 2014), as well as a chapbook, Death by Sex Machine (Sibling Rivalry Press, 2017). She has received awards from the Poetry Foundation and the Helen Zell Writers Program, as well as fellowships from the Vermont Studio Center and the Rhode Island State Council on the Arts. Her poems have appeared in journals including Poetry Magazine, American Poetry Review, and New England Review, and her work has been featured by the Huffington Post, Ms. Magazine, PBS NewsHour, and Angry Asian Man.

A former Co-Director of the award-winning Providence Poetry Slam, Franny has been a finalist in competitions including the National Poetry Slam, the Individual World Poetry Slam, and the Women of the World Poetry Slam. She is a two-time winner of the Rustbelt Poetry Slam and has performed her work in schools, conferences, theaters, and bars across the country. She has taught students of all ages and levels of experience, including at the University of Michigan as a Graduate Student Instructor and through organizations like Project VOICE and InsideOut Literary Arts Project. A Kundiman Fellow and graduate of the VONA Workshop, she founded the Brew & Forge Book Fair, a fundraising project that brings together readers and writers to build capacity in social justice community organizations.

I interviewed Franny to discuss the different communities to which she belongs as well as how she is transforming the literary landscape.

Please discuss your involvement in the Brew & Forge Book Fair project. How did you get involved in this project? How has it changed over time?

The Brew & Forge Book Fair began as one of those rapid-response projects that cropped up in the wake of the 2016 presidential election. I was in my first semester in my MFA program and feeling disconnected to the organizing communities I’d been a part of. Organizing has been for me, at times, a very effective balm against feelings of despair and powerlessness (though it also has its fair share of both!). So, without that work to run to, I wondered what writers could do, on a small and immediate level, to leverage our power to shift as many resources as possible, as quickly as possible, to the groups that were already fighting on the ground level. I wanted, too, to make a project whose structure would replicate the kind of world I believed in creating; one that required interdependence and collective decision-making, whose funding structure was as participatory as possible. So the idea is that people buy signed copies of books directly from the authors, and the proceeds go to a great, locally-focused community organization. That organization is chosen by a vote by the participating authors, from a slate of five groups that are using effective, direct action-based organizing.

The scale of the project has stayed pretty small; we’ve made four small grants of $2000-$2500 to organizations like Assata’s Daughters in Chicago and OLTT (which organizes trans Latinx communities) in Texas. It’s now run by a steering committee, but otherwise, I’d like for it to stay small. We have a tendency to think of a successful project as one that’s able to expand rapidly; in this case, I’d rather make something that’s sustainable and replicable. 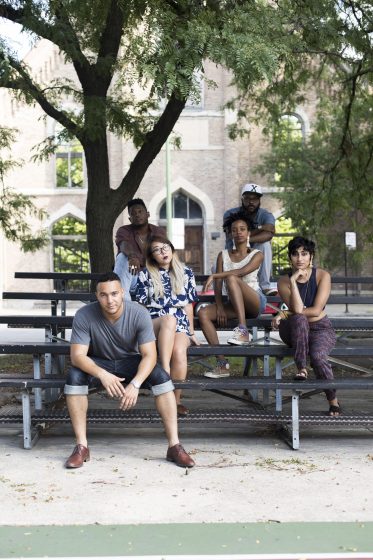 What other literary projects or groups are you currently involved with?

The main thing on my mind these days is the after school poetry club I lead at the Detroit School of Arts, through the CityWide Poets program at Inside Out Literary Arts here in Detroit. I love teaching, and it’s always fascinating to see what does or doesn’t click with my students.

There’s also VS, the podcast I host with poet and ever-boo Danez Smith, which is a very fun project, but also one that feels important to me in terms of trying to shape the literary world we believe in. Our tagline is “where poets confront the ideas that move them,” and for us that means trying to build a big reminder–to listeners, to institutions like the Poetry Foundation, to the literary world at large–that poetry is driven by the urgencies of the world in which it lives. We also want the show to be one that brings a wide range of voices to the table–emerging and youth poets as well as very established folks. It’s been important for us to approach writers who have taken different pathways through poetry as being experts in their particular craft. And lastly, I’m proud of the way the podcast operates as a free educational tool, especially for writers who don’t currently have access to spaces to think deeply about poetry and craft.

My collective, Dark Noise, is currently working on ways leverage what we’ve built over our five years of writing together to build support systems for emerging writers of color. That project is still in development, so I can’t say much about it right now, but we’re currently in conversations with Kundiman, Cave Canem, and CantoMundo about how to support their work. Other than that, I’ve got my hands in a few other projects: curating a series of video poems by queer APIA poets through the Smithsonian Asian Pacific American Center; editing for Hyphen Magazine; starting to write a monthly column about menstruation and queerness for an online journal; lots of stuff!

What communities do you currently belong to? Do you write with these communities in mind?

When we interviewed Eve Ewing for the VS podcast, she defined community as the people to whom you feel accountable, and who are (at least in some part) accountable to you. That relationship with accountability changes with every poem. Sometimes, a poem feels most reciprocally accountable to young, Asian American women, other times, to queer people of color, to Koreans, to my friends, to poets writing about cyborgs and machine learning, to people who have seen a particular movie, to that one person in my MFA program. When I write, I think sometimes about who might listen, about who of my loved ones might be in most dynamic relationship with the particular poem. But I don’t usually set out writing a poem for a particular community, and certainly not as an attempt to represent anyone but myself.

As a writer, why is literary citizenship important?

It’s hard for me to think about literary citizenship without thinking about how fraught the concept of citizenship, specifically when thinking about the nation state. It makes me think that the way we understand the personal responsibility of writers is necessarily tied up in a model that defines personhood by legible, legal status according to appropriate ways of entering the state. I think there are lots of reasons that it’s good for poets to be involved in many parts of the ecosystem of poetry (teaching, running journals, organizing readings, judging contests, etc.). But I also feel like it’s worth asking what systems of exclusion or control we might be replicating by talking about “citizenship.” What do we get out of that approved belonging?

I want to be a thoughtful, conscious participant in poetry, one who’s trying to strengthen the more just world that is possible, both within and outside of the boundaries of the literary world. This comes out of a sense of responsibility to the people I love, to the poets and spaces that have nourished me. If that’s what literary citizenship means, then great! But I feel, sometimes, that we reward any kind of participation in the machine of poetry–even the kinds that protect power where it sits–with the title of “literary citizenship,” and I feel suspicious of that.

What qualities / traits does a good literary citizen exhibit?

To think further on this, maybe a “good” literary citizen is a lot like a “good” subject of the state. A poet who pays to attend an MFA program, who edits a small online journal, who organizes a reading by mostly-white MFA graduates, who reads the slush pile for a book contest–this all counts as literary citizenship, and it can all work to keep the status quo exactly where it is. That said, it’s not necessarily (though perhaps sometimes) helping anyone to be a “bad” literary citizen, either, any more than it’s necessarily righteous to simply be an unruly subject. Maybe I envision a kind of belonging to the literary world that’s in a dynamic tension bent toward justice–that pushes and pulls and is pushed toward making something better.

You currently live in Hamtramck; do you have a literary community there or in Detroit?

It’s a strange thing, to know you’ll live somewhere for only a short period of time–and particularly fraught in a city like Detroit. That said, I feel deep love and gratitude for the writers I’ve been able to build with here, many of them through spaces like Inside Out. There are folks here that became a home for me since I moved to Michigan almost three years ago. More than anything, I feel lucky to be a student of Detroit’s literary history and culture.

Teachers and teaching artists inspire me–the ones who really love and care about their students’ work, who value mentorship, who are thinking carefully and critically about how to make their classrooms into nourishing and just spaces. I feel inspired, too, by anyone who reads overwhelming amounts of poetry (whether for prizes or publication or admissions) and can still approach poems with love and excitement. I feel inspired by people like Fatimah Asghar and Hanif Abdurraqib, who publish beautifully and ambitiously in multiple genres, and who approach every outward-facing part of their creative lives as ways to build community. And I feel inspired with the presence and care with which Aracelis Girmay writes emails!

Who/what are you currently reading?

I’m in the middle of Natalie Eilbert’s Indictus (it’s wild and so so so good) and The Obelisk Gate, the second book in N.K. Jemisin’s The Broken Earth trilogy. Which means all my sentences are weird, and all my metaphors are geological. Next up is a Jean Valentine new and selected, Sharon Olds’ Odes, Esmé Weijun Wang’s essay collection The Collected Schizophrenias, and Sesshu Foster’s City of the Future, in who knows what order. I’m moving to Western Massachusetts to be with my partner and to teach, and I’m looking forward to learning and building with folks there. I’m excited about some pieces we’ve got in the pipeline at Hyphen, and I’m looking forward to learning more about journalism and publishing through that work. My writing these days is gravitating toward lyric essay and prose poems, though I also keep revolting against that impulse. We’re working on doing a live Brew & Forge at AWP, and I think that’ll be a fun test for a new way that project might live in the world. And my book is out in a few months! Which means I’ll be not only celebrating with my folks in Detroit, but going on the road and talking to people about it constantly for a while–taking what’s been in my head for the past few years and helping to usher it into the world, hopefully mindfully; hopefully, with care.

Franny Choi’s next poetry collection, Soft Science, will be out from Alice James books in April, 2019.