September 30 is the International Day of Translation, which the UN General Assembly formally recognized on 24 May 2017 through Resolution 71/288.

This year, the work of translators and interpreters becomes even more important because of COVID19. The COVID19 pandemic is not only a health crisis; it is also a linguistic crisis, described by one source as history’s biggest translation challenge. In many places overseas, and even here in the US, access to healthcare begins with access to proper information delivered in the languages spoken by diverse linguistic communities. It was for this reason that the theme the International Federation of Translators (IFT-FIT) has proposed for this year’s International Day of Translation is “Finding the Words for a World in Crisis“.

Happy International Day of Translation to everyone! Briefly describe the short story you translated.
La isla de los conejos [Rabbit Island] is a collection of short stories by the distinguished Spanish author, Elvira Navarro, published in January 2019.  I translated the first short story in the text, “Las cartas de Gerardo,” which centers on the long-awaited fallout of a young couple, Natalia and Gerardo, while they take a trip around their native country of Spain. Much of the story’s setting is within Natalia’s mind, as her questions about her relationship with Gerardo, past feelings, memories, and confusion consume her during the trip.

Why did you choose to translate this particular short story?
I chose to translate this short story out of the collection due to its cultural similarities to young American adults’ quests, in terms of relationships, growth, and self-exploration. Aligning with many American interests of romantic betrayal and a questioning sense of self, the translation of this text allows Navarro’s craft and narrative to be enjoyed across the Atlantic, an audience I perceive as one to appreciate this text, both as entertainment and as an intellectual pursuit.

What sort of challenges did you come across while translating?
My priorities when translating this text were fidelity to the source text and readability of the target text, a coexistence that required me to  overcome multiple challenges. Achieving fidelity to the original text in my translation involved retaining Navarro’s elegant yet succinct use of prose to convey the emotional turbulence of her characters. Doing so would provide American readers with the same sense of discomfort and disorientation provided to Spanish of the original text. However, this aim interacted aggressively with the additional objective of readability. The original text could be argued to lack readability because of the confusing nature of its style, but it is important to note that this complexity is not the result of a cultural disconnect. I was resultantly charged with the task of creating a linguistically legible and intelligible text that maintained the story’s sense of confusion, while meticulously doing so not through cultural differences, but rather through style.

How did the Minor in Translation Studies prepare you for translating this story?
This process required careful consideration and took much of what I learned about translation theory in my classes into account in order to solve issues that presented themselves throughout the process. In my coursework for the Minor in Translation Studies, I learned about a multitude of phenomena and methods to employ and consider while translating. I used many of these including literary estrangement, dynamic equivalence and domestication/ foreignization. This toolkit allowed me to successfully translate not only the words in the text, but all of the meaning behind it as well.

What do you like most about translation?
I enjoyed translating this text, as it required me to be creative and try to find different solutions to convey metaphors and emotions from one language to another. I was able to use some creative writing techniques in re-creating these literary devices, which added an artistic element to the work of translating. Additionally, I enjoyed reading and dissecting Navarro’s text, as I found many experiences in the narrative similar to my experience studying abroad in Spain. I was able to draw real-life connections between my experiences in Spain to those in the US, and I thought it was super interesting that Navarro studied at the same university I did when abroad, la Universidad Complutense de Madrid!

Congratulations to Lauren and thank you to all of the seniors who submitted their translation to the contest this year. Submissions are due by Tuesday, April 21, and will be judged by a team of faculty members in Comparative Literature.

A prize of $500 will be awarded at the end of winter term.

Submissions are due by Tuesday, April 14, and will be judged by a team of faculty members in Comparative Literature.

A prize of $500 will be awarded at the end of winter term. The winner or the winners will be invited to read at the department’s end-of-year reception on Friday, May 1. The University Record announced a new Mellon Sawyer Seminar, “Sites of Translation in the Multilingual Midwest” organized by the Department of Comparative Literature starting in Fall 2020 for two years. U-M humanities scholars have secured a $225,000 grant from The Andrew W. Mellon Foundation to explore the Midwest as a multicultural, multilingual region shaped by successive waves of international and domestic migrations. They plan a series of events under the foundation’s Sawyer Seminar program.

Read the full article in The University Record.

Did you hear? Canon Translation Journal has launched a new website! Canon is a student-run online journal that publishes translations by U-M undergraduate and graduate students.

Canon is now accepting submissions for the 2019-2020 academic year!  Translations are accepted on a rolling basis and details on how to submit your translation can be found on their website.

Marlon James Sales, Postdoctoral Fellow in Critical Translation Studies in the Department of Comparative Literature, presented a lecture entitled, “On Filthy Nouns and Dirty Verbs: Translating Sex in Tagalog Missionary Linguistics”, for the Friday Lecture Series in the Center for Southeast Asian Studies at U-M in March 2019. A video of the lecture is available online.

Marlon James Sales, our Comp Lit Postdoctoral Fellow in Critical Translation Studies, was recently interviewed by the Australian Broadcasting Corporation for an article about the significance of the Spanish language and Spanish heritage in the Philippines. In the article written by Alan Weedon, Marlon discusses Filipino literature in Spanish and its translations.

Read the full article, “The Philippines is fronting up to its Spanish heritage, and for some it’s paying off”, on the ABC website. 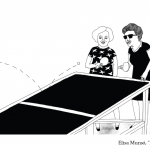 Edited by Megan Berkobien and María Cristina Hall, Barings // Bearings collects sixteen pieces of contemporary women’s writing in Catalan together with the brilliantly understated illustrations of the artist Elisa Monsó.

This special issue of Absinthe witnesses a living, Catalan language through the emotional labor of translation. It is also a testament to the thriving worlds of women’s writing in Catalan, with time-travelling fiction by Bel Olid (tr. Bethan Cunningham), regrets on pregnancy sublimated into an airborne taxi ride in a story by Tina Vallès (tr. Jennifer Arnold), Mireia Vidal-Conte’s poetry reflecting on Virginia Woolf’s suicide (tr. María Cristina Hall), a story of revenge on an abusive elderly woman by Anna Maria Villalonga (tr. Natasha Tanna), as well as reflections on war, bookstores, and generational conflict in post-Franco Spain. These often surreal pieces of Catalan fiction are informed by several essays and works of literary memoir, including those by Marta Rojals (tr. Alicia Meier) on the state of the Catalan language and Najat El Hachmi (tr. Julia Sanches) on the conditions of growing up in Catalonia as the daughter of Moroccan parents. These latter pieces resist and explore the contours of multilingualism, highlighting the intra- and interlingual reality of spoken Catalan alongside Spanish and Amazigh. Barings // Bearings invokes the feeling of a people through the work of a new generation of translators.

Read the full issue online first. Copies can be purchased through our website or Amazon.