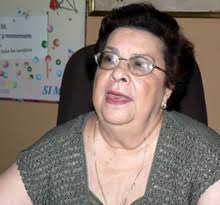 Vilma Núñez, born in 1938, served as the first woman on Nicaragua's Supreme Court after the Sandinista Revolution. As a student, she became a member of the FSLN and participated in the anti-Somoza struggle, until she was imprisoned for these efforts in 1979. Núñez has been unofficially banished from the FSLN after running for president against Daniel Ortega and defending charges of sexual abuse against him. Núñez founded the Nicaraguan Center for Human Rights (CENIDH) in 1990.
Keywords: gender-based violence, human trafficking, prostitution, imprisonment, international rights, politics, law
Media: Transcript (English, Spanish), Video , Bibliography, Name Pronunciation Audio

Martha Ojeda, born in 1956, is the Executive Director of the Tri-National Coalition for Justice in the Maquiladora, where she directs the Maquiladora Worker Empowerment Project. While a worker in the Free Trade Zone factories, she led the Nuevo Laredo Sony Movement and wrote a manual on Mexican Federal Labor Law. She has received the Petra Foundation Award, "Troublemaker of the Year" by Mother Jones Magazine, and the Quality of Life Champion's Public Service Award.
Keywords: international rights, intersectionality, politics, law
Media: Transcript (English), Video, Bibliography, YouTube Video, Name Pronunciation Audio

Malgorzata Tarasiewicz was born in 1960. She is the organizer and leader of the Polish section of the Network of East-West Women. Tarasiewicz became involved in anti-Communist university strikes as a student during the early 1980s, which eventually led to her activism on behalf of women's rights. She admits that the labor unions with which she was involved were anti-feminist, especially during the early 1990s with the national anti-abortion debate supported by the overwhelmingly male leadership of the Solidarity Labor Union and the Catholic Church.
Keywords: international rights
Media: Transcript (English, Polish), Video (English, Polish), Bibliography, English YouTube Video, Name Pronunciation Audio