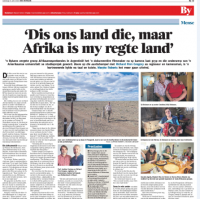 In more news from the From Africa to Patagonia team, members Andries Coetzee, Lorenzo García-Amaya, Micha Fischer, and Nick Henriksen along with the filmmaker Richard Gregory screened their documentary film Boers at the End of the World at the Woordfees arts festival in early March, just days before most of the world shut down due to Covid-19. The Woordfees or “word festival” takes place in Stellenbosch, South Africa, and held its 21st annual festival of poetry, music, arts, and music this year.  Maryke Roberts, a reporter for Die Burger magazine, took note and wrote a comprehensive print feature on the team’s remarkable project.