Lucille Sobczak was the owner of the Polish Yacht Club off of Chene. The PYC was one of he most famous restaurants in the neighborhood that has been operating since 1909 in the same location. Ms. Sobczak had a good memory and I interviewed her at the PYC in October 2002. We were joined for a couple minutes by Rudy Kramer a customer who talked about the basis for the name Polish Yacht Club. Interview conducted in October 2002 with a follow up in October 2004. 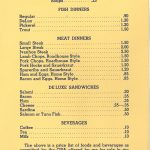