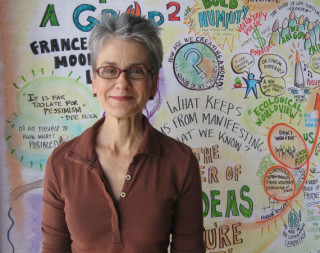 On January 18, Detroit Food Policy Council welcomed Frances Moore Lappé to the Julian C. Madison Building to talk about her journey – from her early-career decision that food would be the focus of her life’s work, to her recent project to investigate food challenges and solutions around the globe, to her belief in living democracy.

Moore Lappé is the author or co-author of 18 books about world hunger, living democracy, and the environment, beginning with the three-million copy Diet for a Small Planet in 1971.

She was in Ann Arbor the night prior to her DFPC visit as part of the University of Michigan lecture series, Food Literacy for All, featuring different guest speakers each week. She accepted an invitation to come to Detroit to spend time with people involved in the local sustainable food movement.

During Moore Lappe’s informal 30-minute talk, she told stories of her travels and research – stories that she felt connected with Detroit’s food struggles and the city’s work to improve the food system and food justice.

In one such story, she spoke of seeing Pepsi signs in eucalyptus tree groves in the foothills of the Himalayas after learning about a natural, healthy cooling drink that local people had used for generations to deal with the incredible humid heat. A local doctor shared with her the toll that processed food, particularly soda, has caused for patients, who, just a few decades ago, were weak from not enough calories. Now they all get enough calories but 60 percent of them suffer from diabetes and heart conditions.

She told of communities in Brazil and southern India that were finding innovative ways to transform lives through access to healthier food. And she said she was glad to learn the story of the good food movement here in Detroit so she could share Detroit’s story in her next speech.

In the end, she said that there is a need for real connection to create meaning in our lives. “The only way we can meet our physical and deep, deep emotional needs is through living democracy at every level.

“This is about living democracy and finding our voices and standing up and learning that together we can change the world so that everyone has that sense of power, meaning and connection.”