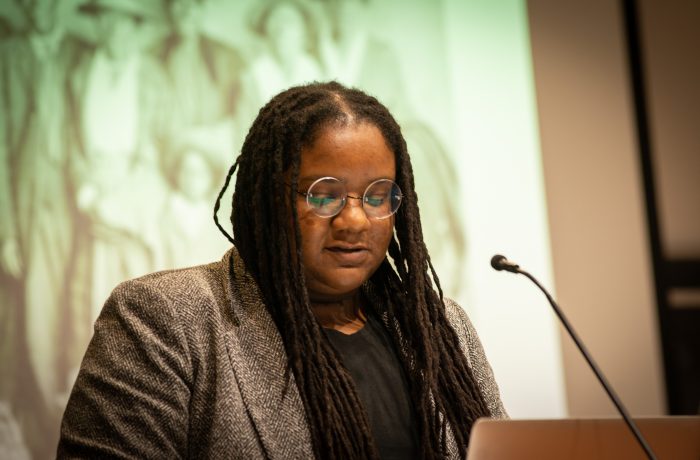 Dr. Jessica Kenyatta Walker started her romance with academia in high school and since then she has forged a uniquely intersectional career uncovering the way race, space, symbolism and so much more, compose what we know materially, culturally, and nutritionally as food.

How did you become interested in the intersection of sustainable food systems, Black feminism, identity, and culture?

“It is a weird intersection and it started in undergrad. I was one of those people who knew that academia might be my kind of thing. During a summer research program, I spent a lot of time thinking about identity, Black feminism, rituals, language, and symbolism. I was really fascinated with how food was the most material thing we know of in a physiological and everyday way and how it was also deeply symbolic. I remember going to my advisor and telling her I think I want to study food and she literally let out a laugh. At that time anthropology and food was in the realm of ritual kinship and wasn’t in itself something you would study. I tried to find anything I could on Aftrican American women and food tradition and I didn’t find a lot of things. There was one book though, Building Houses out of Chicken Legs: Black Women, Food, and Power, by Psyche Williams-Forson, that was poking holes into my assumptions, and explaining how power exists in food systems This author eventually became my dissertation advisor after I was able to bring her to campus to give a talk. I went on to pursue American Studies as a field which housed all these ideas I knew were strongly intertwined.

The first chapter in my manuscript, Her Kitchen is The World: Black Women and the Culture of Soul Food, focuses on the USDA extension archives from the progressive era to the 1950s. This chapter covers reports on programming that changed the domestic space for African Americans–what they ate, how they tied nutrition to race, and consequently, how food traditions changed and evolved. The manuscript centers similar domestic spaces through television, radio, film, music, cook books, and figures in the culinary world. Part of my argument is that we have to look at all of these things to understand that food is both music and technique and provisioning. It is also memory, nostalgia and trauma and I want to see where these things collide. That is why my work centers this phrase called “nervous kitchens,” to embody that tension between what we know as the normal, nurturing, domestic space, and the reality of white supremacy that makes those things uneven, and inaccessible for some.”

What are some of your strongest food memories?

“The work that I do is very suspicious of food memories and how nostalgia can work on them but there are some lessons from them as well. I grew up in Cleveland. It’s midwestern, my dad’s favorite restaurant was hungarian, and there was typical amish fare, meat and potatoes. I have very great memories of my mom cooking spaghetti, specifically the smell of onions sauteed with green peppers. And I really like the mix in Cleveland with eastern european foods, fresh farmers markets, po-boys, etc.

I also think about how my dad grew up in Cleveland in the 40s and 50s, and how in exchange for picking dandelions for his Italian neighbor, she would give him tomatoes from her garden. He would also catch perch from Lake Erie and exchange that for other things. It’s a reminder that this urban gardening phenomenon has actually existed and it’s in our memory. We have to ask ourselves what force can be so quick and so violent to erase that practice? And what are the stakes of losing that practice? Thinking about and restoring those types of memories and not necessarily saying “let’s go back to there” because that’s a dangerous assertion, but what force takes that away?”

Can you speak to how housing decrimination is so intimately tied to the inequalities in our food system?

“The idea that, right before integration, there were segregated all Black communities: the dentist, the grocer, the lawyer, the school teacher, the doctor, and the mechanic were mostly, if not all, Black. Then bussing happened alongside other desegregation policies that made white flight possible. We saw this in Kerrytown, which was a formerly Black neighborhood of Ann Arbor. It is really this systematic divestment that is occurring in these communities after integration. This is kind of the cost of integration. We know that Brown v. Board passed in 1955 but it wasn’t until the 1970s that the last schools became integrated. A decade before I was born. And most would argue that it still hasn’t happened and we have just seen a different versions of housing discrimination. So the reason your neighborhood and your food system are connected is that they are your network. Your neighborhood is also where you can see investment and see those investments in your lawn, your business, your neighborhood, returned, because people stay.

This is also related to the material sense of cultural appropriation. Just think about food as a source of intellectual property. One where established food traditions can legitimate businesses that can then define a neighborhood for decades. In these neighborhoods, people feel their status and location verified by restaurants and food culture. So when people cannot own these establishments, or feel alienated from others who profit from the cuisine but don’t show up for the people, existing inequalities are hardened. Eating equitably is basically to eat with choice and to have options. It’s never just an issue of education. I think people are often surprised that African Americans have known and tried different types of consumer practices since being brought here for our agricultural expertise. So that can be undercut and overlooked when you don’t have physical spaces like restaurants. Restaurants and local food spaces can become generational keepers of that history.

How is your work being impacted by the conversations around white supremacy we are having today? And how your work is impacting the antiracism movement in turn?

“It’s just reminders, really, at this point. It is nothing new that we haven’t said before. And a big reminder is that this is an extension of the organizing of three women of color: Patrisse Cullors, Alicia Garza, and Opal Tometi. They centered this matrix of oppression, this outcome of white supremacy, and focused on humane conversations about immmigration, housing policy, and also environmental racism. The Black Lives Matter movement is not just a story of African Americans. It started with immigration policy and police brutality. I am reminded of the work of  Fannie Lou Hamer in the 70s and how this is reminiscent of the work she was doing. She was a woman of color standing at the head of organizing and insisting that white supremacy is just as relevant in your meals as it is in education or politics.

I am encouraged by a lot of projects like The Okra Project which centers the domestic life of trans people of color. I love that approach to health because it does not say anything about carbohydrates, protein, co-morbidity rates. It is not about the pathologized Black and brown diseased body, it is about space and symbolism. It is about respect and attention and it is a lesson that I have seen many times when I am researching the progressive era where nutrition was the new, hot thing. Back then, nutritionists worried that racialized groups of people would be forever resistant to eating healthy because their tastes were biologically different. We still tend to normalize and center this ‘education’ only approach  but the Okra Project first starts by acknowledging that your house needs to be free from harm before you can eat food. That you need to have a safe home, restorative practice, and access to health care.

I am encouraged, I am revived, but there is no shock and awe. This is a drum we have to continue to beat. This whole race thing is not too complicated to integrate into our work around sustainable food systems nor is it an auxiliary issue.”

What are your influences and particular authors, articles or documentaries of importance to your work?

There is actually one book that started this whole journey for me in 2007, Vibration Cooking: or, the Travel Notes of a Geechee Girl by Vertamae Smart-Grosvenor. When I picked this book up I was shook. It was colloquial, sassy, satirical and it had these recipes interspersed. The things she points out between recipes, are things that I’ve been talking about, distrust of cruel whtie food vendors, as well as housing, consumer, and healthcare discrimination. These are not incidental to the food, she is trying to say if you want to pay attention to inequality, these are the places you have to pay attention to.

I am inspired by the three musketeers, Monica White, Ashanti Reese, and Dara Cooper who we have all had on campus. They have produced some of the most critical work on the real effects of white supremacy in our food system. I am currently reading Demonic Grounds: Black Women and the Cartographies of Struggle. Though more discipline specific, it is one of those books where you can only get through a few pages before you have to get up and process. It changes everything. It is also a really good check to the field of geography and shows how disciplinary knowledge can be limited. I’ve also been thinking about race and the senses when it comes to food and Taste of the Nation: The New Deal Search for America’s Food by Camille Begin is a great book that explores this.

What is your vision for an equitable, healthy, and sustainable food system?

There have been a lot of people doing the work to center people in the food system and I think you as students are leading the way. We do race in the food system as an action, its things we do everyday. I also keep returning to the legacies of the work of culinary figures, Black women such as Edna Lewis, the Grande Dame of southern cooking. She also says that food is jazz, food is Tennessee Williams, food is communal practices. I focus a lot on those things and if you look around the foodstuffs, you would see a call for this really integrated form of community.

Tell us a bit about your courses this coming year.

I’m really excited about the courses I am teaching in fall and winter. This fall I am teaching a freshman and senior seminar in African American Foodways. The senior seminar is a capstone and we are going to be looking at digital resources for understanding food and belonging in the African diaspora.I want them to have a stack of information that they can say they developed so they will be producing infographics and self driven projects. In the winter is my Food in American Culture course which explores American food through the social differences that have historically defined it. How do we know what is not American food? How do we know what counts and how does national cuisine come to be?  As an R&E course we will answer these questions with a focus on how racial meaning has changed over time. Students often know a lot more about their foodways than they think so we connect that with their everyday experiences around food and identity.

You can watch Monica White and Dara Cooper’s Food Literacy for All talks here and here, respectively.