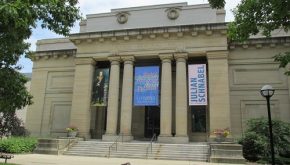 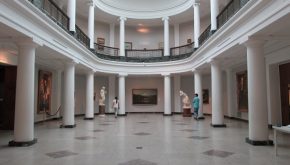 Built in 1910 to commemorate those U-M students who served in the Mexican War, the American Civil War, and the Spanish-American War, Alumni Memorial Hall today is part of the University of Michigan Museum of Art (UMMA). It has a sandstone exterior with a facade featuring four massive neoclassical columns leading to a grand two-level hall with Ionic columns above superimposed upon Doric ones on the ground floor below.