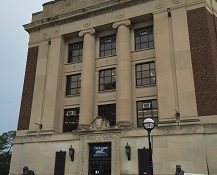 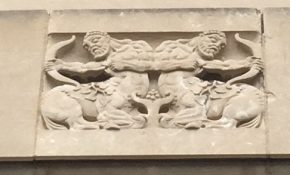 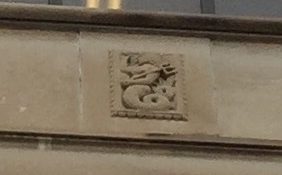 The U-M Museum of Natural History is housed in another one of Albert Kahn’s many structures on campus. The building’s Neoclassical Ionic-inspired facade is similar in design to that of the 1100 North University Building, also built by Kahn, which stands across the street to its South. The portal is more ornate and majestic, though, decorated with a stone door-frame that one might find surrounding the entry to many an important building in the Greco-Roman world. Moreover, the reliefs in several of the spandrels on the upper levels feature mythological characters, such as tritons and centaurs. While we might consider such ornamentation to be an odd choice for a Museum of Natural History, it shows that the visual vocabulary of Greek myth was very much still an important way to signify importance and our connection to the past in the early 20th century when the building was constructed.