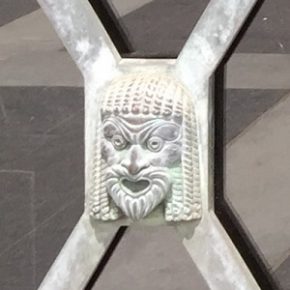 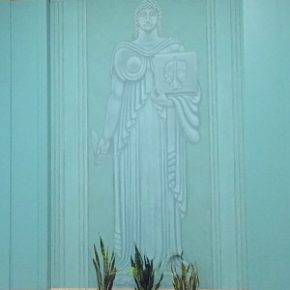 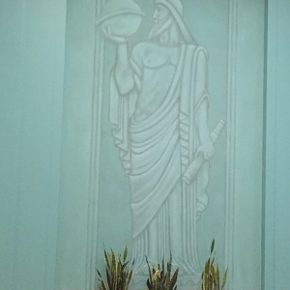 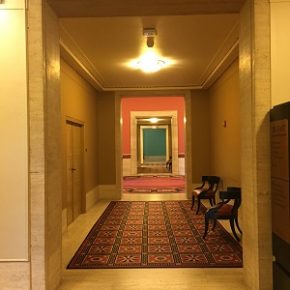 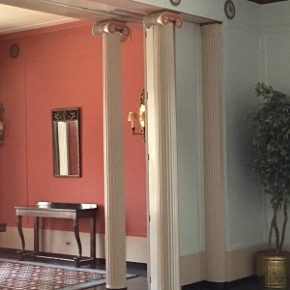 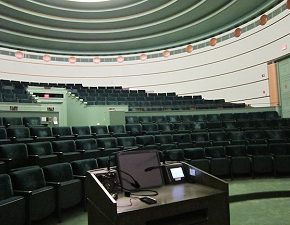 The interior of the Rackham School of Graduate Studies is one of the hidden treasures of the University of Michigan. Designed by William E. Kapp (a student of Albert Kahn) and completed in 1938, the building is a masterpiece of Art Deco musing on the classical world. The three entry portals (reminiscent of many an ancient temple) are decorated with several small masks from Greek drama. Walking up the stairs to the second floor one will find huge paintings of figures in Classical dress — one holding a book with a figure of two heads (perhaps the Roman god Janus), the other a globe and spyglass. Once at the top of the stairs it is possible to see through several rooms of different sizes to the other side of the building, which is an architectural technique that is especially prevalent in many an ancient villa, such as those discovered at Pompeii. The building is filled with other smaller details, such as miniature columns of several sorts on the fourth floor, but perhaps its most impressive classical re-imagining is the Rackham Amphitheater, with its huge oculus shining down on those in attendance as made famous in buildings such as the Pantheon in Rome. Although not in the typical neoclassical mode perhaps (Egyptianizing motifs abound, as well), Rackham is no less an important contribution to the classical spirit of the University of Michigan campus.