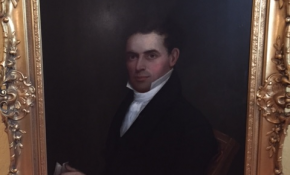 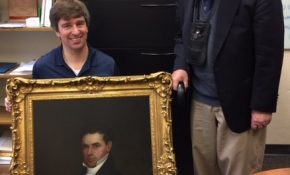 Joseph Whiting (1800–45) was the first professor of ancient Greek when the University of Michigan first opened its doors as a true institution of higher learning in 1841. Possibly due to his premature death, just days before the first college class would graduate in 1845, there has for long been no surviving painting or image of this founding father of the University. Fortunately, his long-lost portrait was discovered in 2016 by John Posch, of the Department of Classical Studies. Upon convincing evidence of its authenticity, it was then purchased by the department and installed in its library. Although access is usually restricted to the public, a visit may be made arranged with the department (2160 Angell Hall) upon request.

Even before the discovery of his portrait, Joseph Whiting was long recognized by the University with a cenotaph memorial. This memorial, now called the Professors’ Monument, stands as the oldest monument on campus.