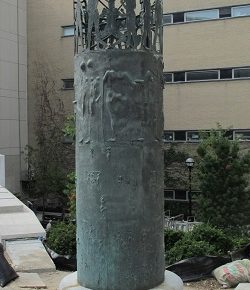 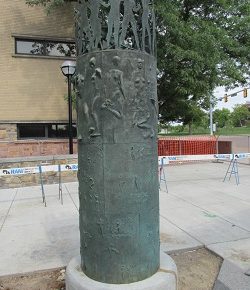 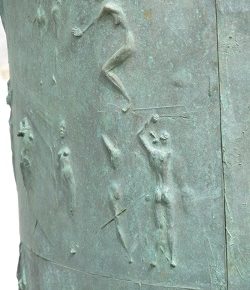 The Californian sculptor Robert Graham often drew upon Classical forms – but always in a way that presented a challenge to our expectations. (His headless statues in front of the Rose Bowl for the 1984 Summer Olympics in L.A. is perhaps his most famous work.) His Dance Cylinder in front of the Taubman Medical Library takes on the cylindrical reliefs of ancient victory columns. Figures appear on the column, as they would have on Marcus Aurelius’ Column in Rome, but in different sizes at different levels and only in fragments, with the bottom ones being the smallest and least distinct. The cylinder is not topped with a statue, moreover, or even a capital for that matter, but with a crown of silhouette figures that are the easiest by far to make out. There is no clear narrative to the reliefs, moreover, but it is the form itself and not the content that tells the real story. The Dance Cylinder is a time-line of sorts that marks the way that we have advanced in our understanding of the human body – from an unclear, murky ignorance of the human form at the bottom in the past to a clearer and clearer understanding of it as we read up and through time.