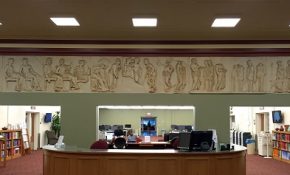 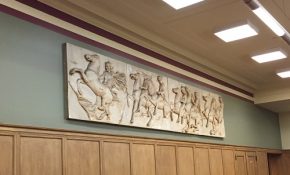 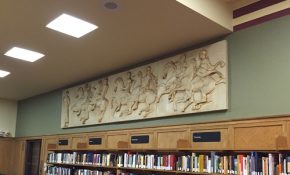 Anyone who has ever ventured on to the second floor of Hatcher has come face-to-face with one of the most magnificent pieces of artwork from the ancient world – or at least a cast of it. The frieze that stands in three parts in the area around the reference desk represents sections of the famous frieze that once ran around the Parthenon in Athens, Greece. Produced by Caproni brothers, these casts were acquired even before there was a Hatcher Library. In 1906, the University Librarian, Theodore W. Koch, acquired parts of the frieze for the reading room of the old library. This decision met with such success that he procured other sections later on during his tenure. The frieze contributes to the heavy influence of the ancient Greek world on the library’s decor, with the Athena woodblock prints on the wall across from the frieze and the murals with figures in Greek dress in the adjacent Reference Room, as well as the medallions with Greek imagery on the facade.

Previous: Orion | Next: Porch of the President's House