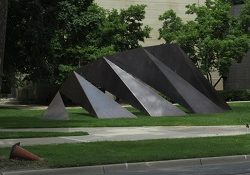 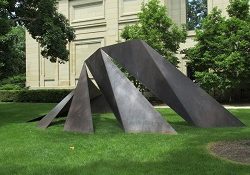 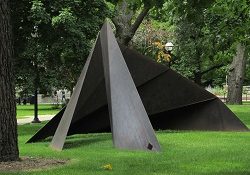 Daedalus is the master craftsman par excellence from Greek mythology. Not only is he credited with sculpting living statues and designing the famous labyrinth on Crete to enclose the Minotaur. His legendary genius was such that he was able to create a set of wings for himself and his son Icarus to escape the island when the king Minos imprisoned them. The 1977 sculpture of Cor-Ten steel that sits just south of UMMA on South University Avenue aptly takes its name from this mythological hero. The five elements of this sculpture by Charles “Chuck” Ginnever create a completely new visual experience from every angle for those who circle it, giving us the sense that it is the statue itself that moves and not us. Daedalus captivates its viewers by its permanent changeability… and yet at the same time it cannot be contained. And that is the point perhaps. As the program for sculpture suggests, the object resists the “increasing environmental homogeneity” of cities today, allowing its viewers to realize their own potential to carve unique spaces out of sameness if given a stimulus to wake up – and to escape what Walter Benjamin would call the labyrinthine monotony that the modern metropolis offers.

Previous: Contexts for Classics | Next: Department of Classical Studies