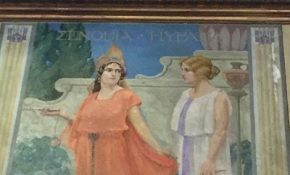 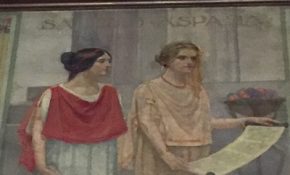 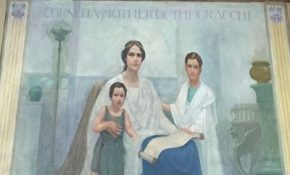 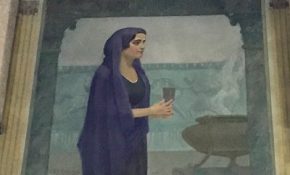 If you have ever had a chance to attend a lecture in the Hussey Room on the second floor of the League, you might have looked up towards the ceiling and seen murals depicting several famous women of Western history and literature: Joan of Arc, Isabella, Elizabeth, Isabella D’Este, Beatrice D’Este, and Victoria Colonna, as well as Ayesha, Judith, Mumtaz-I-Mahal, and the Lady of Siling. Not surprisingly, women from the classical world also play a part in the pageant of notable women, including Sappho together with Aspasia, Cornelia with her two sons, Zenobia with Hypatia, and Artemesia. These groupings are interesting for the way that they take liberties with the chronology of the figures depicted (e.g., Zenobia and Hypatia lived a century apart), as well as for the choice of subject: although Artemesia was a general on the side of the Persian army under Xerxes that nearly conquered Greece, she is depicted here — without any sort of military garb — in the act of performing a sacred ritual. Intended for the inspiration of the young ladies who attended the activities in the League (originally the center for women activities on campus), the murals were painted by James McBernie; however, the choice of women was made by Irving Pond, the architect of the League, who decorated it with other Greek female figures, including the statues of Character and Friendship on the League’s western facade.

Previous: Hatcher Reference Room Murals -- The Arts of Peace and The Arts of War | Next: Hill Auditorium Facade