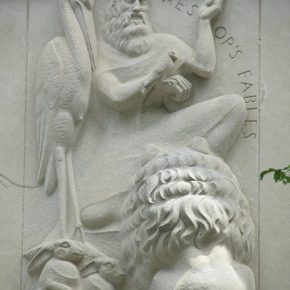 Many know Marshall Fredericks for his works throughout the state of Michigan and in particular the city of Detroit, where he was responsible for Barbour Fountain on Belle Isle and the famous Spirit of Detroit in the heart of the city’s downtown. Fredericks’s art in Ann Arbor focuses mostly on the LSA Building (1948), upon which he placed works in aluminum, bronze, and limestone. One of the limestone bas reliefs found on the west side of the building depicts Aesop’s Fables, with a large figure (presumably Aesop himself) surrounded by various animals. The relief is mirrored on the other side of the entrance by a work of the same dimensions depicting the Native-American legend Hiawatha, who is also portrayed as surrounded by animals in thrall, indicating perhaps that the University of Michigan teaches its students how to see past the differences in traditions and cultures to the common ground that exists among us all (even if the version of Hiawatha that the reliefs depicts is the one filtered through Longfellow’s The Song of Hiawatha, which is not strictly based on Native-American lore as much as the poet’s imagination).