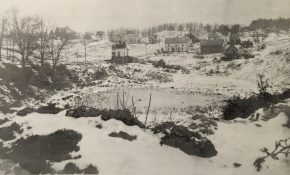 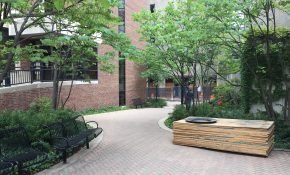 Cat-hole (Photo Credit: Bentley Historical Library)
Alley between UHS and the Dental School where the cathole was located
[map id=”46″]

“Yesterday for the first time in two years I chanced to go by the Cat-hole. I was distressed to find that it is rapidly being filled up. I was the more surprised because not long ago when you and I talked with Mr. Russell about the Campus plan I laid emphasis upon the ultimate transformation of the Cat-hole into a Greek theater, and the suggestion appealed to him – and you said nothing to indicate the contrary.” Such was the letter that President Hutchins received from Professor Francis W. Kelsey dated to January 6, 1919 (which can now be found in the Bentley Historical Museum). It was one of many letters and later newspaper articles that Professor Kelsey wrote about the “Cat-hole” (named as such for all the dead cats that allegedly the medical students experimented on before dumping in the polluted pond in the area where the Dental School and University Health Services now stand). It was Kelsey’s vision – one shared by the Olmstead Brothers, who were in charge of University development in the 1910s – to transform this space into an outdoor Greek theatre that could hold up to 10,000 spectators. Despite the Latin professor’s many protests, the theater did not materialize. The idea of it was definitely on the table for several years, however, further demonstrating the University’s desire to clothe itself in the garb of Greco-Roman architecture.