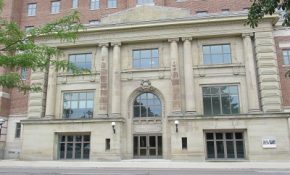 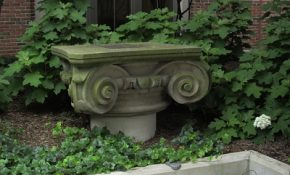 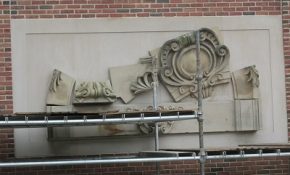 Carnegie Library was built with an impressive Ionic facade in 1907 and was funded by Andrew Carnegie himself to serve as the public library of Ann Arbor and the library for the adjacent high school. In the 1950s, however, the school and library moved to different locations in Ann Arbor, whereas the buildings on the site were purchased by the University and were then transformed into the Frieze Building complex (which was named after Henry Simmons Frieze, the acting president of the University and former chair of what would become the Department of Classical Studies). When North Quad was completed in 2010, several architectural features from the site’s past as the Carnegie Library and then the Frieze Building were incorporated into the new architectural space. Ionic column capitals were placed in the courtyard and other neoclassical architectural motifs were mounted on the walls of the complex. Most impressively perhaps the original facade of the library was integrated into the north side of the building. It is interesting to note that this sort of re-use of former architectural or monumental features as part of a new structure was very much in the spirit of the spolia tradition of the Greco-Roman world whereby parts of old monuments and buildings were incorporated into new architectural works.