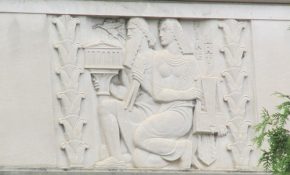 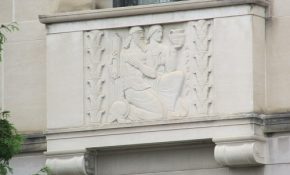 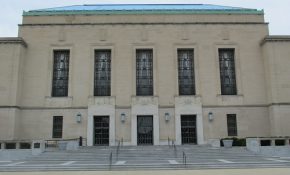 The facade of Rackham speaks in an architectural dialect that resembles Egyptian or Persian much more than Greek or Roman in its “Art Deco interpretation of the classical style.” This is as true of its reliefs as it is of its overall architectural schema. The figures depicted in the adornments seem Near Eastern in dress as well as in their overall appearance. However, if one looks closely at these relief panels – sculpted by the prolific Corrado Parducci in 1936 – one can spot many objects specifically from the Greek world. The leftmost one, for instance, has a hoplite helmet, while the one to the right of the entrance (labeled “Fine Arts”) not only contains a lyre and a small Pegasus but even a model of the famous Parthenon of Athens with its iconic eight columns. Even in a building that eschew a purely neoclassical aesthetic, then, it would seem that the powerful symbolic nature of Greek objects still makes its presence felt.