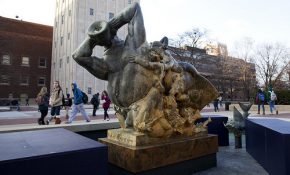 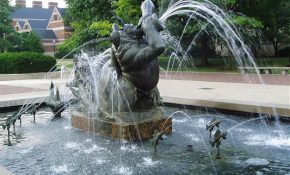 The famous Swedish artist Carl Milles created many works of art that draw upon themes from Greek mythology, including sculptors of Orpheus, Pegasus, Europa and the Bull, as well as several versions of the sea god Triton, such as the one in his sculptural group Sunday Morning in Deep Waters (1940) on Ingalls Mall. While Milles was the sculptor-in-residence at Cranbrook, he designed and executed the bronze fountain as commissioned by the first U-M athletic director Charles Baird, who wanted to honor his childhood friend (and Dean of the Law Faculty) Thomas Cooley. One striking feature of the fountain is the way in which although the source material is clearly Western, the figures themselves are not: Triton seems much closer a depiction of a water god from Asian mythology and his hair (as well as that of his children) is certainly not typical for that of a Greco-Roman god.