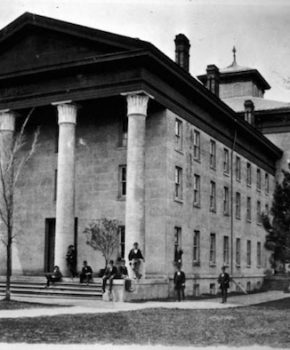 Established in 1850, the University of Michigan Medical School was the first in the United States to own and operate its own hospital (medicine.umich.edu). The east side had a portico with 4 tall Greek columns made of brick and stucco, whose columns made that part of the building known as “the Greek part.” The Greek temple style building the school used was made of sandstone and also had Egyptian Revival columns capitals. It displayed high Greek architectural influence and was one of the finest buildings on campus when it was built in 1850 (Wineberg 2004:34). Unfortunately the magnificent landmark was damaged by fire in 1911 and demolished three years later (Wineberg ibid.). Today Randall Laboratory is located at the site.