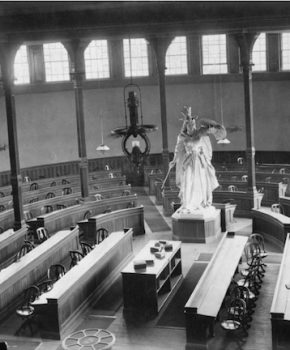 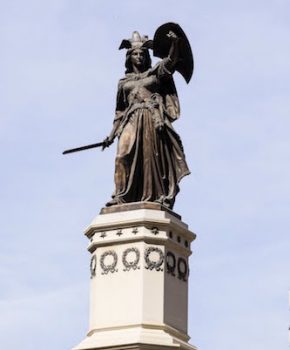 Built in 1883, the University of Michigan’s first library also served as an art gallery until a dedicated art museum was established (Alumni Hall was was constructed in 1910). Titled Michigan this large plaster cast of the Greek goddess Athena dominated the room. Here Athena is depicted striding forward in battle attire with a shield, sword and decorative helmet. It appears that she is blocking an unseen attacker with her shield. Perhaps now she is the new protector of Michigan’s faculty and students (there can be many interpretations). With that role in mind, she could be metaphorically clearing an obstacle so that academic progress can be made. Designed in 1867 and made by Michigan native Randolph Rogers, the cast was for a bronze version of the statue that currently tops the Detroit Soldiers’ and Sailors’ Monument.

Rogers’ talent as a sculptor was first discovered when working in a dry-goods store in Ann Arbor. His employers seeing his potential funded him to go to Italy. After studying in Florence he became famous when he opened a studio in Rome. Rogers lived his entire adult life in the city, but still completed many works, including statues and monuments, in the U.S. Following his stroke in 1882 he bequeathed his papers and plaster casts from his studio in Rome to the University. Unfortunately many of his works were stored in the basement of University Hall during a renovation in 1902 and were destroyed due to steam heat. The library itself was demolished in 1918 to make room for the Harlan Hatcher Graduate Library.