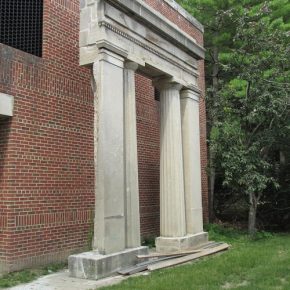 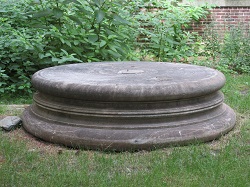 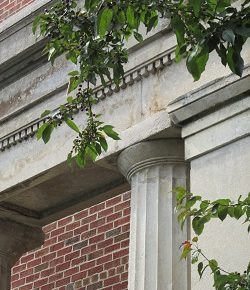 In the constricted space between the south wall of Lorch Hall and a temporary construction site’s HQ stands a Doric entry portal, barely visible from the sidewalk now, almost flush against the brick wall of the building. If one stops and goes past this structure down the narrow path (with its Jimmy Johns’ wrappers and empty beer cans), one will encounter a giant column base supporting only air. What are these neoclassical ruins? They are what remains of the vision of Emil Lorch, the first director of the U-M College of Architecture (1931-1937). Dean Lorch wanted to create an outdoor museum filled with architectural pieces to inspire the students in attendance. The Doric entry portal was originally from the Michigan Mutual Life Insurance Company building in Detroit (1837). The column base probably held one of the columns that Lorch was famous for scavenging from stonecutters’ yards all across the country. In the intervening years, the school has since moved to North Campus, along with some of the other pieces of the “museum” (including what would become Lorch Column). All that remains now is an aged, mostly hidden Greek revival doorway that leads nowhere and a lonely column base surrounded by cigarette butts. Lorch’s outdoor museum has become an architectural graveyard, in other words, a space shielded from view (not un-ironically perhaps) by the temporary offices of a construction company.