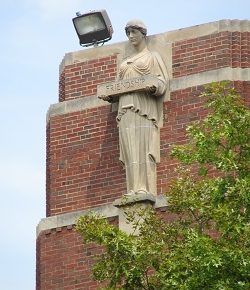 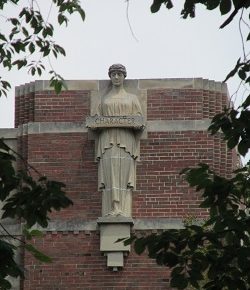 Two female figures in flowing classical dress watch over Ingalls Mall from their perch atop the Michigan League in a way reminiscent of how goddesses would peer down from the tops of Greek temples. Designed by Irving Pond (the architect of the League) and sculpted out of limestone by Nellie Verne Walker, these two women bear the names of Friendship and Character. These were the two attributes that were apparently expected of women attending the University in the 1920s when the League was built as a center for women’s activities on campus. It is interesting to compare the two figures of the League to their counterparts in the two male figures of the Union – “The Student” and “The Scholar” – who are in modern dress and mode, as well as much more visible from their position on either side of the building’s main entrance on State Street.